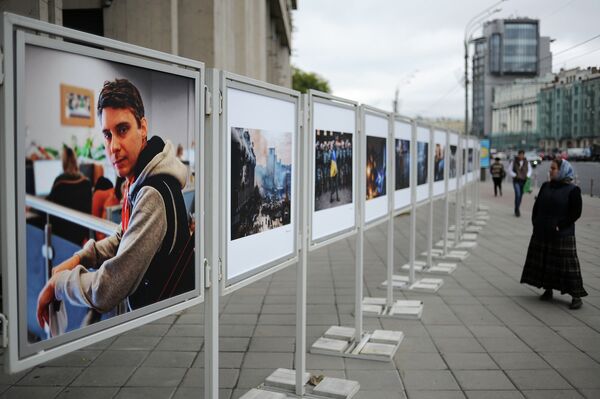 © RIA Novosti . Ramil Sitdikov
/
Go to the photo bank
Subscribe
Participants of the Roundtable on Ukraine in Vienna held a moment of silence this Wednesday in memory of Rossiya Segodnya photojournalist Andrei Stenin.

VIENNA, September 3 (RIA Novosti) – Participants of the roundtable on Ukraine in Vienna held a moment of silence on Wednesday in memory of Rossiya Segodnya photojournalist Andrei Stenin.

The roundtable was held in the Museums Quartier Wien cultural complex which is currently hosting a two-week exhibition dedicated to the humanitarian catastrophe in southeastern Ukraine.

Rossiya Segodnya organized a small exhibit on the sidelines of the main exhibition to draw attention to the faith of journalist Andrei Stenin.

On Wednesday, Rossiya Segodnya Director General Dmitry Kiselev announced that Stenin, who went missing in Ukraine early in August, died about a month ago near Donetsk. According to the Russian Investigative Committee, the journalist was killed in a Ukrainian attack on a column of refugees guarded by several eastern Ukraine independence supporters.

The car, in which Stenin was traveling while on an editorial assignment, was shot at and torched on a highway just outside Donetsk.

Stenin is the fourth Russian journalist killed in the Ukrainian conflict.