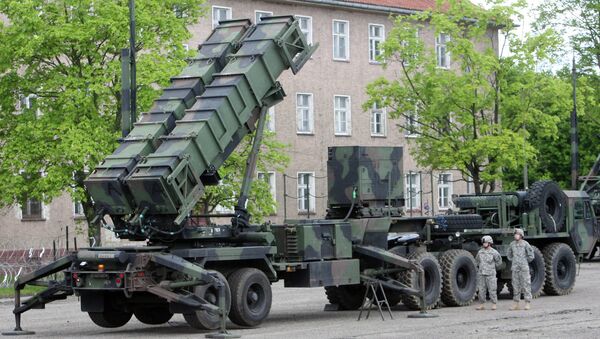 © Sputnik / Igor Zarembo
/
Go to the photo bank
Subscribe
Proposals from Baltic and Polish leaders ahead of the NATO summit, requesting that NATO’s anti-ballistic missile defense system be focused on Russia are unrealistic, as the system has no capability against potential Russian threat, according to representatives of the US Missile Defense Agency (MDA)

MOSCOW, September 4 (RIA Novosti) - Proposals from Baltic and Polish leaders ahead of the NATO summit, requesting that NATO’s anti-ballistic missile defense system be focused on Russia are unrealistic, as the system has no capability against potential Russian threat, according to representatives of the US Missile Defense Agency (MDA).

“From a technical standpoint, it’s really not arrayed or capable against a Russian threat. It’s not designed that way, it has no capability that way,” Brigadier General Kenneth Todorov, Deputy Director of the MDA told RIA Novosti on Wednesday.

Asked directly whether the proposals by Poland and Baltic countries to target Russia with the system were technically feasible, Lehner said they were not.

“Not from a technical standpoint, because our system is really geared toward the Middle East, so that's the way it faces. We’re only talking about probably 48 interceptor missiles between Poland and Romania... Russia has hundreds and hundreds of short, medium, and long-range ballistic missiles, so it’s no threat," Lehner stated.

German newspaper, Der Spiegel reported on August 26 that leaders from Poland, Latvia, Lithuania, and Estonia proposed focusing the European Phased Adaptive Approach BMD system be directed against Russia ahead of the Thursday NATO summit in Wales. The proposal was criticized because it would undermine repeated assurances by the US that the system is strictly intended to defend against rogue states in the Middle East.

“I really don’t think the system was designed for defense against Russia, but the system is very capable,” Deputy Director of the MDA said, asserting that Russian capabilities would overwhelm the limited number of sensors and interceptors.

“We are confident at MDA that the system that is going into Romania and Poland is designed to meet the requirements and policy commitments that our President and Congress have asked us to do,” he added.

NATO members are scheduled to meet this week in Wales to discuss the alliance's response to Russia, which it accuses of interfering in Ukrainian affairs.

NATO has been strengthening its military presence in Eastern Europe, following the escalation of the Ukrainian crisis in spring. In particular, the bloc sent additional warships to the Black Sea and bolstered air patrolling missions over the Baltic states.

Russia has criticized NATO’s actions, arguing they lead to greater instability in the region.