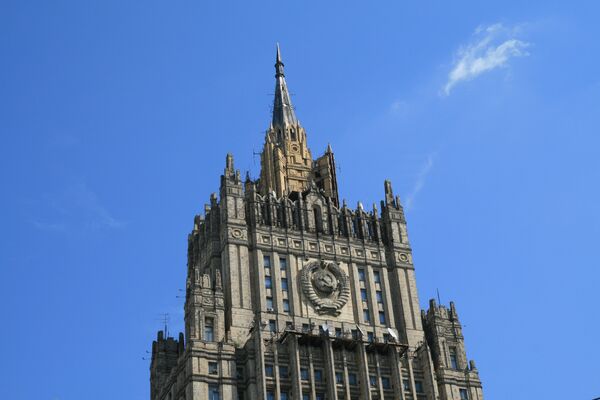 Moscow has called on the international community to decisively pressure Kiev into stopping its practice of hampering the work of journalists in the country, the Russian Foreign Ministry said in a statement Wednesday.

MOSCOW, September 3 (RIA Novosti) – Moscow has called on the international community to decisively pressure Kiev into stopping its practice of hampering the work of journalists in the country, the Russian Foreign Ministry said in a statement Wednesday.

“Over the last few months, Russia has lost four of its journalists in Ukraine. The situation is unheard of, especially in comparison with other bloody armed conflicts over the past few years. The illegal practice of hampering journalistic duties, including attacking them, killing them, and unjustly detaining and abducting them because they are not objective with Ukrainian media, needs to be immediately stopped,” the statement reads.

Press freedom in Ukraine, especially in the country’s east, has steadily deteriorated, with journalists being detained, kidnapped and even tortured. These cases have been condemned by various international human rights organizations.

In August alone, there were several reports of journalists who went missing or were banned from entering Ukraine.

On August 3, Elena Blokha, editor-in-chief of the Donetsk-based Munitsipalnaya Gazeta (Municipal Newspaper), was arrested along with her 17-year-old son, who was later released, while leaving the eastern Ukrainian city. Blokha is accused of supporting terrorism.

Also on August 1, three journalists – one from the Serbian weekly Pecat, one working for the 112 Ukrainian television channel and a freelancer from the Luhansk region – went missing and were found five days later in Dniprodzerzhynsk by local residents.

The journalists said they were detained after crossing the Russain-Ukrainian border, were "blind-folded for five days, with their hands tied, ill-treated, threatened and forced to remove their clothes before being released separately at night."

Finally, Rossiya Segodnya photojournalist Andrei Stenin went missing in early August. On Wednesday, Russian investigators confirmed that Stenin was among those killed during an attack on a convoy of at least 10 vehicles carrying civilians.