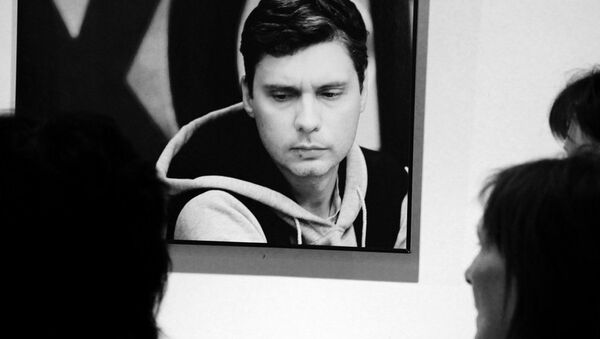 Photojournalist Andrei Stenin, who went missing in eastern Ukraine in early August, died about a month ago when a car he was travelling in came under fire, Rossiya Segodnya Director General Dmitry Kiselev said Wednesday citing results of an examination by the Russian Investigative Committee.

MOSCOW, September 3 (RIA Novosti) — Photojournalist Andrei Stenin, who went missing in eastern Ukraine in early August, died about a month ago when a car he was travelling in came under fire, Rossiya Segodnya Director General Dmitry Kiselev said Wednesday citing results of an examination by the Russian Investigative Committee.

“Our colleague, photojournalist Andrei Stenin has been killed. It turned out that he was not taken prisoner. It turned out, no one planned to swap him for any Ukrainian military personnel or accuse him of terrorist activities. All of the announcements that we heard from the Ukrainians about Stenin’s fate were lies. He died one month ago in a car that he was in while fulfilling his journalistic duties. The vehicle came under fire and burned down on a highway near Donetsk,” he said.

He also said that “today the results of the expertise were revealed: he was inside that vehicle, a 33-year-old young man who was full of life, an incredible professional, and a compassionate person, Andrei Stenin.”

“He didn’t have any children and wasn’t married. Only his mother remains who the entire month was waiting for news about the fate of her son with hope. We, his colleagues, were waiting along with her, and without any exaggeration, the entire journalistic society of the country was also waiting. We followed Andrei’s fate and demanded that international organizations freed him. We are thankful to everyone in Russia and abroad for your activities and for your support. Unfortunately, when we were trying to do everything possible and even impossible for his freedom, Andrei was already no longer with us,” Kiselev went on.

He added that “the civil war that was unleashed by the Ukrainian leadership has led to a huge loss of lives among civilians and peaceful people, and has led to unimaginable cruelty toward journalists.”

“In just a few months, Ukraine became one of the most dangerous places on Earth for journalists. Four Russian journalists have already died in this war: correspondent Igor Kornelyuk, video engineer Anton Voloshin, cameraman Anatoly Klyan, and photographer Andrei Stenin. Andrei Stenin’s photographs in the building of our agency on Zubovsky Bulvar are a gift of remembrance that we give to Andrei. He sacrificed his life for these photographs, for the sole purpose of letting the world see the truth. Rest in peace, Andrei Stenin. You will never be forgotten,” said the director general of Rossiya Segodnya.

Stenin went missing in eastern Ukraine on August 5. Sources said that the journalist was possibly held by the Ukrainian military, but Kiev has never officially confirmed the information.

On August 9, Rossiya Segodnya filed a request with the Ukrainian Interior Ministry to take action in order to locate Stenin, with the ministry undertaking the case on August 11.

On August 12, Anton Herashchenko, an adviser to the Ukrainian interior minister, said in an interview with Baltkom radio that security forces had arrested Stenin on charges of assisting terrorists. However, later Herashchenko claimed he was misinterpreted.

Stenin joined Rossiya Segodnya’s predecessor, RIA Novosti, in 2009. He reported from many conflict zones, including Syria, and covered the Arab Spring events in Egypt.