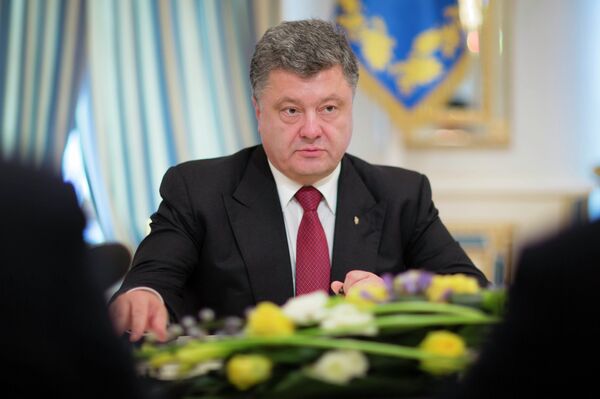 The military conflict in Ukraine may become “frozen to some extent,” but the Kiev government has no other choice, said Serhiy Kunitsyn, an adviser to Ukrainian President Petro Poroshenko.

KIEV, September 3 (RIA Novosti) – The military conflict in Ukraine may become “frozen to some extent,” but the Kiev government has no other choice, said Serhiy Kunitsyn, an adviser to Ukrainian President Petro Poroshenko.

“Our country has been exhausted in moral, financial and military terms. It’s clear that this conflict will become frozen to some extent, but we have no other choice, the country needs a break,” Kunitsyn told the Ukraina TV channel on Wednesday evening.

During his visit to Mongolia Wednesday, Russian President Putin unveiled his seven-point peace plan for Ukraine, calling on Kiev to withdraw troops from the southeastern regions of the country and noting that humanitarian cordons should be opened to allow the movement of refugees and the delivery of humanitarian aid to the conflict-torn areas.

Ukraine's southeast has been under fire since mid-April, when Kiev launched a military operation against independence supporters who refused to recognize the legitimacy of the new Kiev government that came to power after the February 22 coup.

According to the latest UN estimates, more than 2,500 civilians have died as a result of the conflict which has brought a humanitarian catastrophe upon Ukraine’s southeastern regions, where citizens are struggling without water and electricity.

On Wednesday, Putin and his Ukrainian counterpart Petro Poroshenko discussed the first steps to bringing an end to the bloodshed in eastern Ukraine over the telephone.

According to the Kremlin, the views of the leaders on the issue were extremely similar.