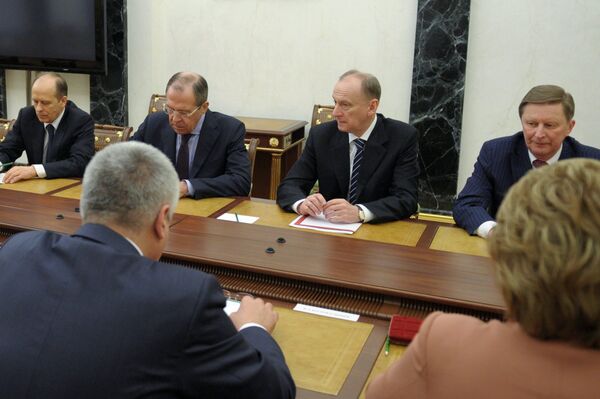 Russia will update its military doctrine by the end of 2014 to reflect new security threats, including the expansion of NATO, US missile shield plans and the political crisis in Ukraine, the deputy head of the Russian Security Council said Tuesday.

MOSCOW, September 2 (RIA Novosti) - Russia will update its military doctrine by the end of 2014 to reflect new security threats, including the expansion of NATO, US missile shield plans and the political crisis in Ukraine, the deputy head of the Russian Security Council said Tuesday.

A special working group was set up within the framework of the council to introduce amendments to the doctrine, which was last updated in 2010.

“We plan to finish amending the military doctrine this year,” Mikhail Popov, the council’s deputy chairman, told RIA Novosti in an interview.

“I have no doubts that the issue of NATO military infrastructure encroaching on our borders, including through the expansion of the alliance, will remain among the biggest military threats to the Russian Federation,” the official said.

“In 2010, this point of the military doctrine triggered a sharp reaction … A number of high-profile officials reproached our country’s leaders in outdated thinking, claiming that NATO is not Russia’s enemy … We were assured of good intentions, but the moves of the recent years suggest completely another thing,” Popov added.

Among other security threats, Popov named the determination by the United States and its NATO allies to enhance their strategic offensive potential by building a global missile defense system.

The updated security doctrine will also mention “the emergence of new military threats to the Russian Federation, related to the Arab Spring events, the military conflict in Syria and the situation in Ukraine and around it.”

Amendments to the military doctrine will also touch on Russia’s independence in producing weapons, hardware and other military equipment production.

“Life shows that the reliability of our certain Western partners is a temporary thing, and it is, unfortunately, closely linked with the political situation,” Popov stressed.

The European Union and the United States imposed a few waves of economic sanctions on Russia following Crimea’s reunification with the country in March. The West argues that the referendum allowing the peninsula to join Russia was illegal, while Moscow claims it was fully legitimate. The list of sanctions includes restrictions on Russia’s banking and oil sectors and, in particular, an embargo on arms trading.