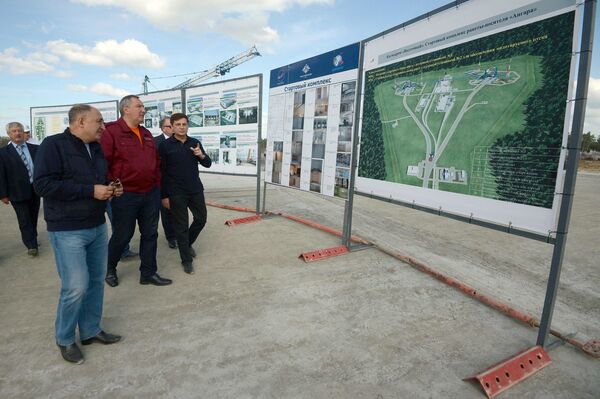 Roscosmos is going to hand over the reins of the construction of the Vostochny cosmodrome to the Russian government, Russian Deputy Prime Minister Dmitry Rogozin said Tuesday.

MOSCOW, September 2 (RIA Novosti) - Roscosmos is going to hand over the reins of the construction of the Vostochny cosmodrome to the Russian government, Russian Deputy Prime Minister Dmitry Rogozin said Tuesday.

“The President supports my proposal with regard to improvement of the standards of the construction projects coordination. The President has been informed of the establishment of a coordinated center within the cosmodrome, the head of which is going to be my Secretariat’s representative from the [Russian] White House, so-called ‘Moscow eye’. It is impossible to coordinate such difficult, multipartite works from the control panel,” Rogozin said.

Rogozin pointed out that the construction of the cosmodrome is now in its final stage, only about 6 months are left until the first middle-class rocket is going to be launched from Vostochny.

“The President has highlighted the personal responsibility of everyone involved in this huge project, of Roscosmos, Spetstroi, Minstroi. All the parties involved should take a new approach, and to pay attention to every ruble and its effectivity in investment into spaceport. So, the President has taken the decision that the Deputy Chairman of the Government is going to be the head of the coordination commission, not the head of Roscosmos. So it is clear that I will not only take personal control of everything, but I will also lead all the works with regards to the Vostochny cosmodrome construction,” Rogozin explained.

The construction workers have repeatedly said that they are failing to meet the tight deadlines, so in 2014 Russian Prime Minister Dmitry Medvedev supported the idea of a coordination center establishment at the construction site, saying that it was difficult to coordinate the works from Moscow.

The Vostochny space center is located in Amur region, in the Russian Far East. It is expected to reduce Russia’s dependency on the Baikonur cosmodrome in Kazakhstan.