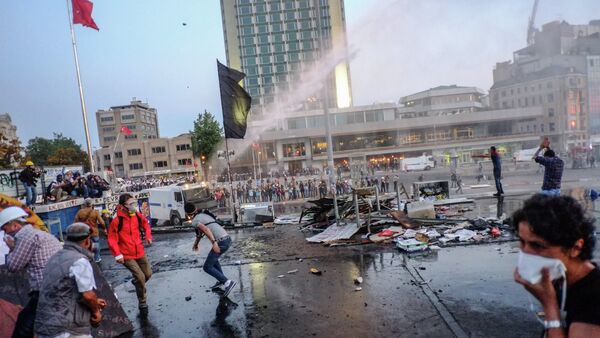 Amnesty International has condemned Turkey for putting on trial 29 Twitter users in Izmir, Turkey, over their alleged role in the 2013 Gezi protests as Turkey is hosting the 9th Annual Internet Governance Forum (IGF), Sherif Elsayed-Ali, Amnesty International’s deputy director of global issues, said in a statement published on the organization’s website Tuesday.

“It’s astounding to see Turkish authorities plough on with the prosecution of Twitter critics, even as they host a discussion on Internet governance where human rights are a key theme,” Elsayed-Ali said.

The IGF, scheduled to take place in Istanbul on September 2-5, is organized by the United Nations (UN) to bring the government, private sector, technical community and civil society together to discuss Internet governance and to share best practice on Internet regulation, security and human rights.

The organization condemns the double standards on freedom of expression online, used by the Turkish authorities, stating that the tweets were not inciting the public to break the law, as claimed by the Turkish government.

Turkey first banned Twitter back in late March, but in April the country’s constitutional court ruled that the ban was unconstitutional.

The Gezi protests were a series of demonstrations and civil unrest in Turkey in 2013-2014, initially aimed to contest the urban development plan for Istanbul’s Taksim Gezi Park.

Subsequently, more demonstrations and strikes took place across Turkey protesting a wide range of concerns, at the core of which were freedom of the press, of expression, assembly and the government's encroachment on Turkey’s secularism.