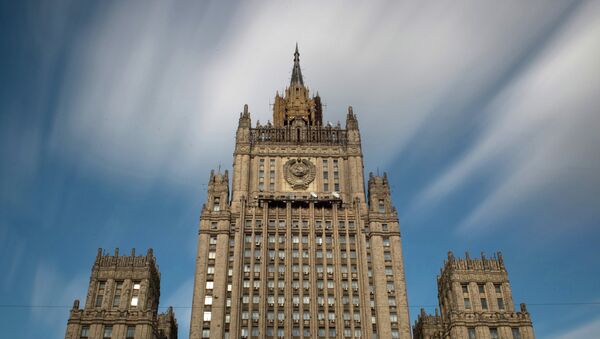 © Sputnik / Maxim Blinov
/
Go to the photo bank
Subscribe
The long-standing tradition of cooperation between Russia and France should not fall victim to “timeserving decisions,” the Russian Foreign Ministry said Monday, commenting on the recent statement by a senior French diplomat.

MOSCOW, September 1 (RIA Novosti) - The long-standing tradition of cooperation between Russia and France should not fall victim to “timeserving decisions,” the Russian Foreign Ministry said Monday, commenting on the recent statement by a senior French diplomat.

“Russia and France have a centuries-long friendship and solid traditions of political and economic cooperation,” the ministry said. “They should not fall victims to timeserving decisions.”

According to the ministry’s statement, French Foreign Minister Laurent Fabius “reported about the results of sanctions against Russia to French ambassadors, who gathered for a meeting in Paris, saying that [Russia’s] GDP and investment have been on decline.”

“At the same time, Fabius had to admit that agriculture companies in France and other European Union countries have to sustain losses and pay for short-sighted decisions by their leaders,” the statement reads.

On August 7, Russia banned food imports from the United States, the European Union, Canada, Australia, and Norway in response to economic sanctions imposed on Russia over its alleged role in fueling hostilities in eastern Ukraine.

The food embargo targets meat, fish, dairy, fruit and vegetables among other produce. Moscow said the embargo would be lifted once Russia saw there was no threat to its national security anymore. According to ING Group estimates, the Russian food ban could cost the European Union about $9 billion in lost production.

It should be noted, however, that despite the tensions surrounding the Ukrainian crisis and Russia’s alleged role in it, France has expressed its intention to fulfill its contractual obligations on the delivery of two Mistral-class ships.