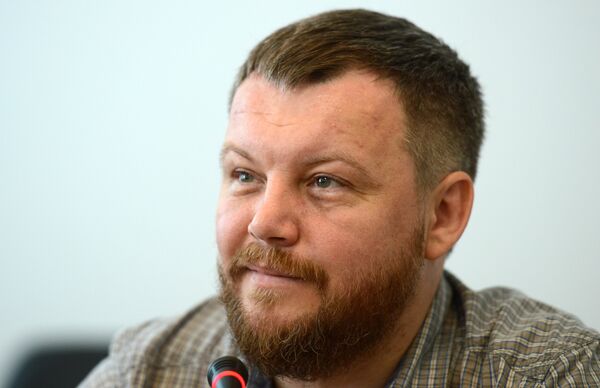 © RIA Novosti . Evgeny Biyatov
/
Go to the photo bank
Subscribe
For the talks in Minsk Monday, the delegation of the self-proclaimed Donetsk People’s Republic (DPR) has prepared proposals intended to launch direct negotiations with Kiev.

MINSK, September 1 (RIA Novosti) - For the talks in Minsk Monday, the delegation of the self-proclaimed Donetsk People’s Republic (DPR) has prepared proposals intended to launch direct negotiations with Kiev.

“We came to Minsk with proposals. In fact, it’s the preparatory stage of the negotiations, we will try to find as much common ground as possible and curb violence. We have brought proposals [needed] to start consultations and subsequently to launch negotiations,” DPR Deputy Prime Minister Andrei Purgin said.

He said the republic has prepared “about 8-9 proposals,” that "include the prisoners swap and the humanitarian mission, and so on.”

The talks between Russia, Ukraine and the Organization for Security and Cooperation in Europe (OSCE), with participation of the representatives from southeastern Ukraine, are held on Monday in the capital of Belarus - Minsk.

Earlier on Monday, Russian Foreign Minister Sergei Lavrov expressed hope that the talks will be mostly dedicated to achieving an immediate ceasefire.

In mid-April, Kiev launched a military operation in eastern Ukraine, where the people were unhappy with the February overturn of political regime. In May, following regional referendums, the cities of Donetsk and Luhansk proclaimed themselves people’s republics. Both cities have witnessed humanitarian catastrophe due to constant shelling and lack of basic supplies.