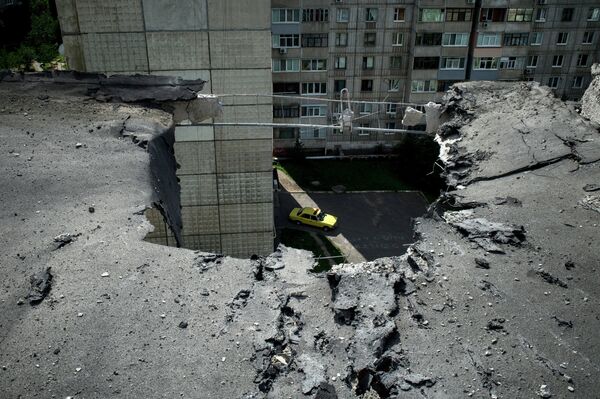 © RIA Novosti . Valery Melnikov
/
Go to the photo bank
Subscribe
Government fighters are largely responsible for the indiscriminate use of artillery and rockets within the Ukrainian city of Luhansk, while self-defense forces are responsible for their use in the outskirts of the city, Human Rights Watch (HRW) reported in a Monday review of civilian casualties of the Ukraine crisis.

MOSCOW, September 1 (RIA Novosti) - Government fighters are largely responsible for the indiscriminate use of artillery and rockets within the Ukrainian city of Luhansk, while self-defense forces are responsible for their use in the outskirts of the city, Human Rights Watch (HRW) reported in a Monday review of civilian casualties of the Ukraine crisis.

“While it was difficult to establish with certainty responsibility for individual attacks amid ongoing fighting,” stated the report released on Monday, “circumstantial evidence indicates that government forces were responsible for many of the attacks Human Rights Watch investigated in the city and that insurgent forces were responsible for several attacks against areas under government control on the outskirts.”

After Human Rights Watch conducted a mission to Luhansk on August 20-22, senior crisis researcher Ole Solvang observed that “the use of explosive weapons with such wide-area effects in a city full of civilians is completely irresponsible and will almost inevitably lead to civilian casualties.”

“Whether used by government or insurgent forces, those responsible should be held to account for this callous disregard for civilian life,” Solvang added.

Approximately 300 civilians have been killed in Luhansk since May. The casualties have largely been the result of widespread artillery, mortar, and rocket attacks. Grad rockets, Smerch rockets, and cluster munitions delivered by Uragan rockets have been used.

HRW notes that the high caliber, low accuracy of these weapons makes it incredibly difficult to discriminate between military and civilian targets.

Both morgue and hospital personnel informed HRW that the vast majority of deaths and injuries of civilians in Luhansk have been from shrapnel injuries from cluster munitions or explosive weapons.

“Ninety-nine percent of the civilians we receive have died from shrapnel injuries,” Anatoly Tureevich, head of the office of the medical examiner in Luhansk said.

Human Rights Watch has urged the Ukrainians on both sides of the conflict to immediately stop using Grad rockets and all cluster munitions near populated areas.

They also called on both sides to strictly adhere to international humanitarian law, and the law of war, respecting the rights of civilians in conflict zones.