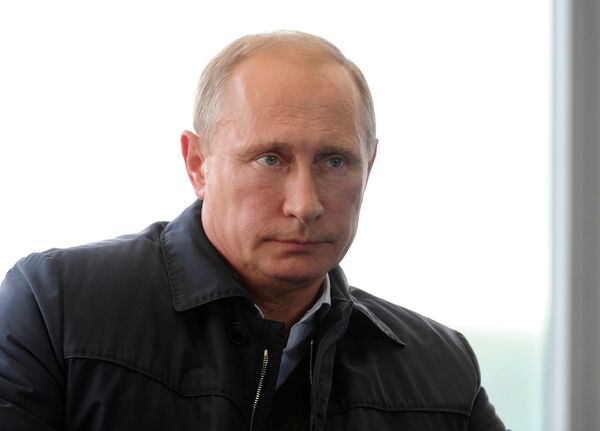 The ongoing events in Donetsk and Luhansk are the result of dramatic developments of the internal political situation in Ukraine, Russian President Vladimir Putin said.

KHABAROVSK, August 31 (RIA Novosti) – The ongoing events in Donetsk and Luhansk are the result of dramatic developments of the internal political situation in Ukraine, Russian President Vladimir Putin said.

According to the Russian leader, the acute situation in the country was discussed with the Ukraine’s President Petro Poroshenko during the meeting in Belarus’ capital Minsk.

"We talked about the urgent situation in Donetsk and Luhansk, of course, we discussed it. Naturally, Russia is looking for a termination of the bloodshed [in the south-east of Ukraine] as soon as possible,” Putin told Russia’s Channel One.

“I think what is happening [in the region] at the moment is a natural reaction of people, who live there and stand for their rights. They were not the first to take up arms, you know? And this is a result of dramatic developments of Ukraine’s internal political situation,” Russia’s head of state added.

The president also noted that it is necessary to respect the rights of these regions’ people.

The military operation, launched by Kiev in mid-April to suppress independence supporters in Ukraine’s southeastern regions of Luhansk and Donetsk has recently become extremely violent.

As the situation in Luhansk and Donetsk regions worsened, thousands of civilians found themselves trapped in the warring regions without electricity, food, medicine or drinking water.

Russia has repeatedly condemned the operation and urged Kiev to stop the bloodshed in the region, which has already claimed thousands of lives, and sent a humanitarian convoy to war-torn eastern Ukraine with about 2,000 tons of aid.