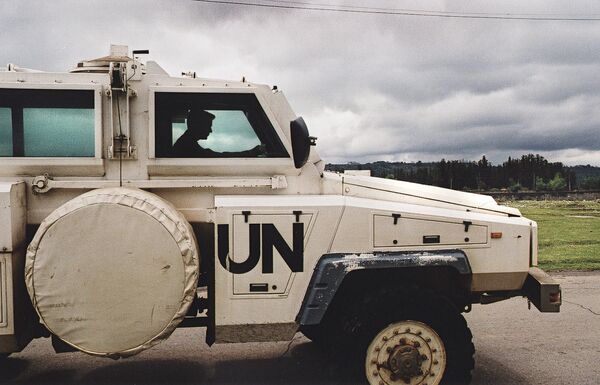 © RIA Novosti
/
Go to the photo bank
Subscribe
With dozens of UN peacekeepers, detained and restricted in their movement in the Golan Heights, the UN Security Council on Thursday issued a press statement condemning the incident.

UNITED NATIONS, August 29 (RIA Novosti) - With dozens of UN peacekeepers, detained and restricted in their movement in the Golan Heights, the UN Security Council on Thursday issued a press statement condemning the incident.

“[UN] strongly condemned the detention of 43 United Nations Disengagement Observer Force peacekeepers from within the Area of Separation in the vicinity of position 27, as well as the surrounding of positions 68 and 69, which are manned by 81 UNDOF peacekeepers, earlier today by a Security Council-designated terrorist groups and by members of non-state armed groups,” said in the statement.

The UN has specified that the 43 detained peacekeepers are from Fiji, and the 81 restricted ones are from the Philippines.

“The members of the Security Council demanded the unconditional and immediate release of all the detained United Nations peacekeepers and called upon all parties to cooperate with UNDOF in good faith to enable it to operate freely and to ensure full security of its personnel,” said in the statement

The Security Council “called up countries with influence to strongly convey to the armed members of the opposition in the UNDOF area of operation to immediately release the peacekeepers."

"They stressed that there should be no military forces in the area of separation other than those of UNDOF, and further reiterated their condemnation for the increased use by elements of the Syrian opposition and other groups of improvised explosive devices in the UNDOF area of operation which threaten the safety and security of United Nations personnel,” the statement read.

The UN would not confirm that Jabhat Al Nusra, named along with the Islamic State in a recent Security Council resolution, was holding the peacekeepers. In the August 22 resolution, the Security Council “demanded the immediate, safe and unconditional release of all those who are kept hostage by ISIS, Al-Nusra Front and all other individuals, groups, undertakings, and entities associated with Al-Qaida.”

The Security Council on Thursday concluded that its members “reaffirmed their unconditional support for UNDOF.”