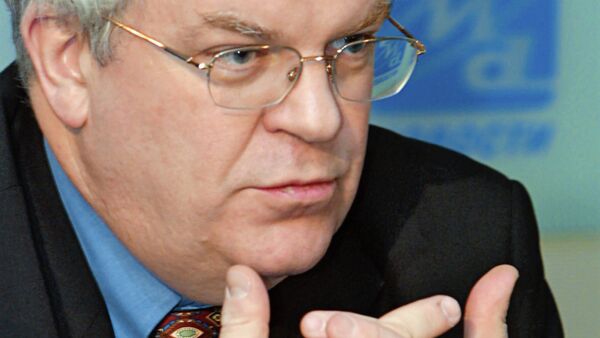 "It doesn’t take an expert to see that the surge of Russophobic rhetoric is timed to the upcoming meeting of the European Council on 30 August in Brussels and NATO summit on 4-5 September in Wales, aiming to remind European and North American countries of the mythical 'Russian threat' and provoke them to take 'strong actions' against Russia," Chizhov said in a statement published on the website of the Permanent Mission of the Russian Federation to the European Union.

"I am sure European leaders, as well as general public, are in a position to take an objective view, draw reasonable conclusions without being misled by ludicrous misinformation, and understand that political solution of Ukrainian crisis has no alternative," he added.

Earlier this week, NATO released images of what it said was Russian artillery on the Ukrainian territory. Ukraine's president also said Russian troops had entered the country and were setting up a so-called new front in the east, leading to more tensions between Russia and the West. Russia denied the allegations.

Since formerly Ukrainian Crimea rejoined Russia and as the Ukrainian crisis escalated, the United States and the European Union introduced several new rounds of targeted sanctions against the Russian economy. Moscow has repeatedly referred to the sanctions as counterproductive, noting that Russia is not party to the internal Ukrainian conflict.