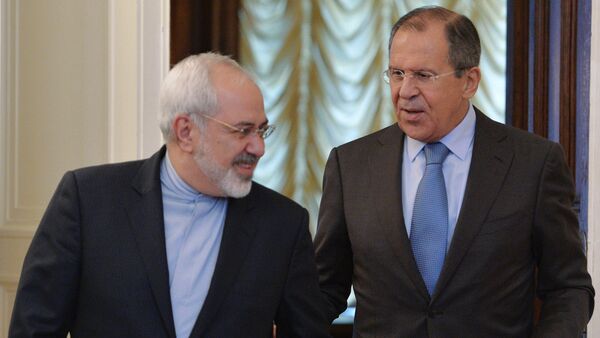 “Ever since Mr. Rouhaniˈs election we have been pursuing a policy of very close relations with the Russian Federation as a strategic and serious partner as a neighbor and as a country with shared stands on noticeable issues at the international scene,” Zarif was quoted by IRNA as saying on arriving in Moscow.

Iran’s foreign policy chief also pointed to the “broadening horizon” of the cooperation between Tehran and Moscow, including the construction of six new nuclear reactors in Iran.

Iran hopes the nuclear talks with the international mediators have reached its final stage and that consultations with Russia will be of a broader nature, Zarif added.

The Iranian minister also touched on the issue of the Islamic State (IS) terrorist group’s advance in Iraq, saying that Iran would consulate with Russian officials on the issue.

The West has imposed economic sanctions against Iran over the country’s nuclear program. Iran argues that its nuclear activities are aimed at meeting the country’s growing energy needs, while the West claims Tehran wants to obtain a nuclear weapon under the guise of a peaceful program.

In November 2013, Iran and the so-called P5+1 international mediation group consisting of France, Germany, the United Kingdom, Russia, China and the United States struck a one-year deal, lifting some sanctions and also allowing Tehran to conduct certain nuclear activities in exchange for greater transparency of its nuclear program. November 24 is the deadline for the group to come up with a long-term comprehensive agreement.