Dr. Arkady Brish: 'I Was Not Afraid to Create the First Atomic Bomb' 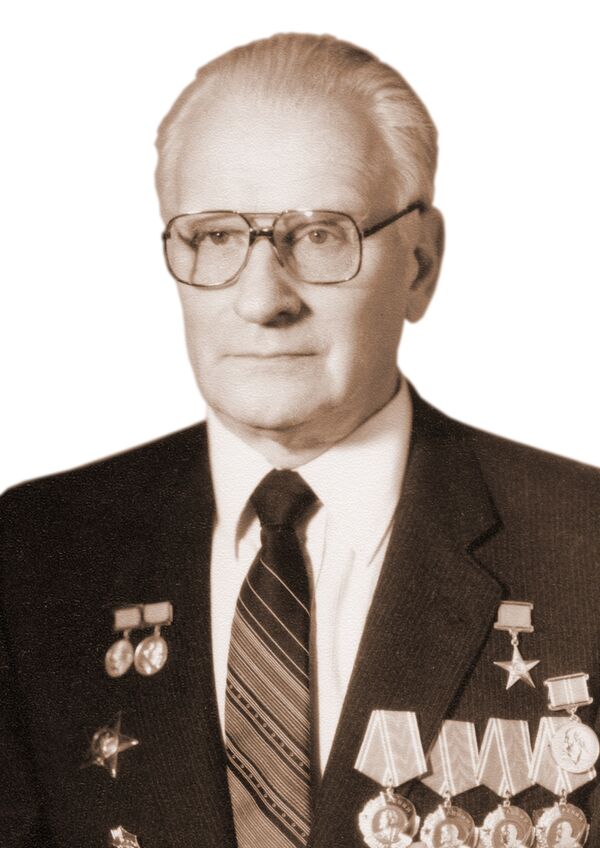 On the eve of the 65th anniversary of the first USSR atomic bomb explosion, Rossiya Segodnya met with one of its creators, Dr. Arkady Brish, a renowned Russian nuclear weapons engineer. Brish told us about Stalin, nuclear myths and why you can’t steal a bomb.

MOSCOW, August 29 (RIA Novosti) - On August 29, 1949 the Soviet Union exploded its first atomic bomb in Semipalatinsk, Kazakhstan. It was code-named “First Lightning” by Soviet scientists and “Joe 1” (after Joseph Stalin) by the Americans. To test the bomb’s destructive capacity, engineers built houses, bridges and even a metro line. The explosion proved to be 50 percent more destructive than initially planned.

This took the world by surprise, because the Soviet nuclear development program was a well-kept secret for nearly 10 years. The US reacted with president Truman’s announcement that he was aware of the nuclear explosion in the USSR. From that moment on, the Cold War shifted towards a balance of power.

On the eve of the 65th anniversary of the “First Lightning” Rossiya Segodnya met with one of the bomb’s creators, Dr. Arkady Brish, a renowned Russian nuclear weapons engineer. Brish told us about Stalin, nuclear myths and why you can’t steal a bomb.

Mr. Brish, what significance does August 29, 1949 actually have in world history?

Dr. Arkady Brish: On that very day, we proved that we had the ability to create our own nuclear weapons and were able to break the monopoly of the US, which was planning to attack our country with atomic bombs. Thus we excluded the mere possibility of a unilateral and impunitive nuclear war. Because of that, we are still able to preserve the postwar peace.

But I should specify that it was an atomic detonation with an automatic control, put on a tower, without the body of a bomb. So, it was not a full-bodied nuclear weapon.

Our first atomic explosive had been made in the shortest time-frame, and in a country which had been left half-ruined after the war. How on Earth was it possible?

Dr. Arkady Brish: It was really a surprise. A real miracle. Our industry had been destroyed. Millions of people had been killed. And the country’s leadership displayed true courage, will and talent, having gathered together outstanding experts and leaders who were able to develop an atomic bomb in the shortest time-frame possible, having been given all the necessary resources. And we were really pressed for time. If we were late, the Americans could have used their nuclear weapons against us. (By the time Joe-1 was tested, the US had already dropped two bombs on Japan – editor’s note)

It was really a stroke of luck that Stalin appointed the then-young Igor Kurchatov scientific research director. Kurchatov was the one who recruited all the scientific staff for the atomic bomb project. He also suggested Yuly Khariton for the post of chief designer of the first Soviet atomic bomb.

The development of its own nuclear weapons was undoubtedly a great feat for Russia.

Dr. Arkady Brish: This is not true. This is said by the people who simply do not understand what they are talking about. What could it possibly mean to “steal” a bomb? One might obtain some documents, which would be meaningless in and of themselves. You need high-profile experts, technology and a separate branch of industry to implement them, and it is a huge bulk of work. Experts, who understand how complicated technical systems are developed, have no doubt about it.

By the way, the claim that our atomic weapon was only developed thanks to our intelligence agents first emerged in the US in 1950, shortly after the exposure of Klaus Fuchs – one of the participants of the US nuclear program, who voluntarily supplied our intelligence community with information about his work. Later American journalists and some US scientists claimed that with the help of its intelligence agents, the Soviet Union not only obtained the secret of atomic bomb development, but the hydrogen bomb as well. Thus the US could provide an easy explanation for the outstanding success of the Soviet scientists.

However, our scientists do give credit to our intelligence community. The information they provided was of particular importance at the initial stage of our atomic project, up to 1945. That data forced the leadership of our country to give special attention to the development of the atomic bomb for the nation and inspired scientists such as Nikolay Semenov, Yuly Khariton and Yakov Zeldovich, who had already achieved substantial success in nuclear research before the war.

In 1945, however, the US published a book, “Atomic Energy for Military Purposes”, where it openly described the process of how the US had developed the atomic bomb. The people who made the decision to publish that book were absolutely convinced that we wouldn’t be able to develop our own atomic bomb quickly. But they were wrong. They did not take into account that we had outstanding scientists. And regardless of all the military losses, our country managed to preserve its powerful scientific and technological potential.

Those who talk about the alleged “theft” of the bomb do not take into account the historic and political connotations. We needed to demonstrate as soon as possible that we also possessed atomic weapons. It was all about the safety of our motherland and not a question of technical priorities.

One can’t say that our first atomic detonation was a full copy of the American one. Thanks to the intelligence we only knew its scheme, which did not need a blueprint. All of the engineering and technical documentation for the development of an atomic charge using that scheme was worked out by our experts.

By mid-1949 we had conducted our own scientific and technical engineering studies for the development of our own, innovative atomic bomb, but the leadership of our country made the decision to use a charge that had been developed by the US scheme for its first test. And it was justified – at that time a war with the US could have broken out at any moment. To test our own, absolutely innovative construction would have meant to increase the risk of an unsuccessful test. We could not have afforded that.

However, already by 1951, during the second test, we used the charge for an atomic bomb, which had been fully developed by our scientists. It was twice as powerful and twice as light as the one that had been developed under the US scheme.

The Soviet scientists placed the utmost priority on the development of the first transportable hydrogen bomb, which was successfully tested in the USSR on August 12, 1953. At that time, the US did not have anything even remotely similar, and the US scientists admitted that.

There is a myth (which, like any myth, does not have any documented confirmation), that the Soviet scientists who worked on the bomb were honored for their achievement based on the penalties they would have suffered had the test failed. Those who would have been executed if the bomb had failed to detonate were honored as “Heroes of Socialist Labor” and those who would have been merely imprisoned were given different orders and slightly less prestigious awards. Allegedly, that was the decision of Lavrentiy Beria, who oversaw the atomic project, who struck fear in the hearts of the scientists.

Dr. Arkady Brish: There was no fear! Rather, there was an extreme sense of responsibility and an urge to defend the Motherland. As for Beria, he was an outstanding organizer, and he did a lot for the development of our nuclear weapons. We should always keep this in mind when talking about that work.

Work – is it the most important aspect of your life?

Dr. Arkady Brish: When you develop new nuclear weapons with unique characteristics, it captivates you; you need to prove that it is going to work.

I am a devoted person who easily gets carried away, but my most important occupation has been the development of a weapon which would defend our country. This is what inspired me to devote my whole life to all the issues that I’ve been working on. We could not let any country use nuclear weapons with total impunity.

But now I am eager to live on, to be able to pass the knowledge I possess to younger generations and the feeling of personal responsibility for the results of this work, which was always a hallmark of the atomic scientists of my generation.