Poroshenko, Merkel Agree to Coordinate Efforts Ahead of EU Summit 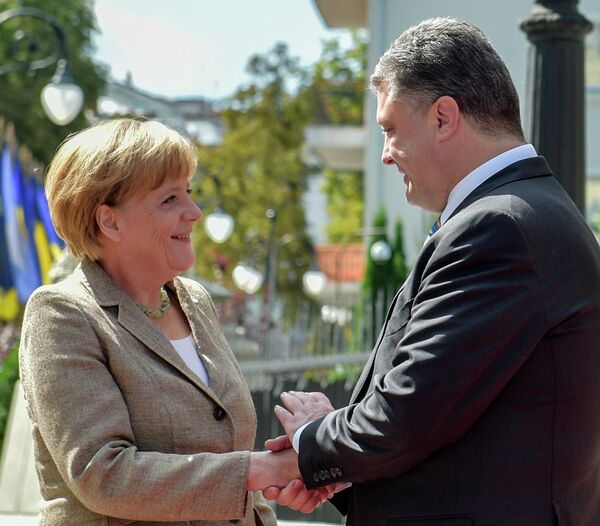 Ukraine's President Petro Poroshenko and German Chancellor Angela Merkel agreed on Wednesday to coordinate their actions ahead of the EU summit on August 30, Ukrainian president's press service said in a statement.

"Petro Poroshenko and Angela Merkel agreed to coordinate efforts ahead of the European Council summit on August 30 for possible further decisive action on behalf of the European Union," said in the statement following the two leaders' second telephone conversation of the day.

Earlier reports said that Poroshenko and Merkel discussed the international format of talks for the resolution of the situation in Donbass.

Poroshenko is expected to pay a working visit to Brussels on the day of the summit at the invitation of top European Union officials.

Since mid-April the Ukrainian government has been conducting a military operation in the east of Ukraine aimed to suppress independence supporters, who refused to acknowledge the new government that came to power after the February 22 coup.

According to the United Nations, more than two thousand people have died as a result of the confrontation, and over 4,950 people have sustained injuries in the fighting.

Moscow has repeatedly condemned the operation and urged for a ceasefire to prevent further casualties.