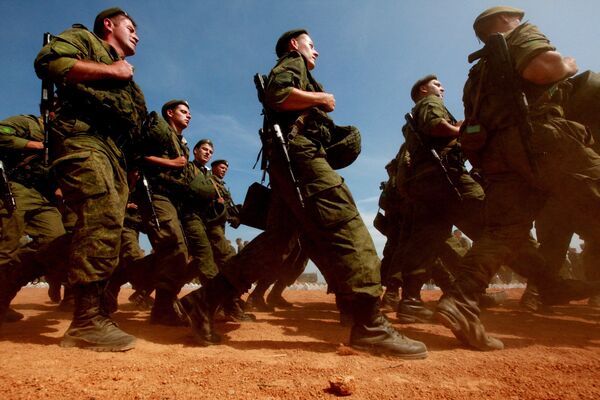 "You know, it has become ridiculous… If earlier, someone would at least put their names to those images, be it Breedlove, Rasmussen, or even Lungescu, now, they are hesitant," Konashenkov said, referring to NATO Supreme Allied Commander Europe Philip Breedlove, Secretary General Anders Fogh Rasmussen and Spokesperson Oana Lungescu.

"It makes no sense to seriously comment on this," he added.

He added that the phrase "NATO published shots of Russian troops in Ukraine" has become too common lately.

"The phrase 'NATO published satellite shots of Russian troops' presence in Ukraine" has become as common in recent months as the famous 'British scientists have discovered…' As a rule in media, those words are followed by the results of some new crazy research that has no practical sense whatsoever," Konashenkov said.

On Thursday, Ukrainian President Petro Poroshenko said that Russian troops had entered Ukraine. The statement came as NATO released satellite images that it claimed were showing Russian self-propelled artillery on the Ukrainian territory. The alliance said about 1,000 Russian servicemen were taking part in hostilities in eastern Ukraine.

Washington failed to verify the information, US Department of State spokesperson Jen Psaki said, adding, however, that the State Department had "no reason to doubt their [NATO's] assessment."

Andrei Kelin, Russia’s envoy to the Organization for Security and Co-operation in Europe (OSCE), denied Kiev’s accusations, saying that "there are no Russian convoys" in Ukraine.

Kiev authorities launched a special military operation in mid-April in the southeast of Ukraine against independence supporters, who refused to recognize the legitimacy of the country’s coup-imposed government.

Since the beginning of the military conflict, Kiev has been accusing Russia of sending troops and weaponry to independence supporters in the region.

Russia has repeatedly denied any involvement in the Ukrainian crisis, urging Kiev to stop the bloodshed and establish a direct dialogue with representatives of Luhansk and Donetsk regions.