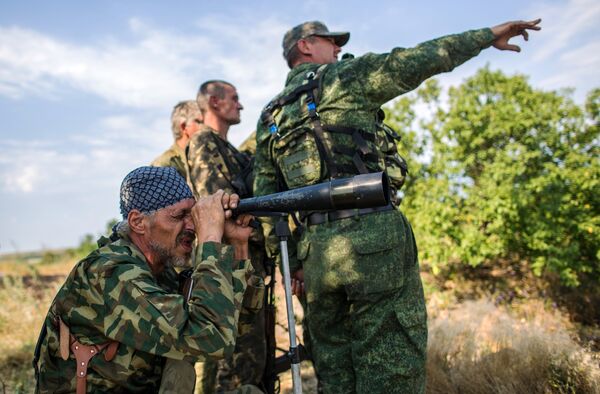 © RIA Novosti . Andrei Stenin
/
Go to the mediabank
Subscribe
International
India
Africa
Donetsk militia forces claimed Thursday to have taken control of checkpoints and strongholds on the outskirts of Mariupol in southeastern Ukraine.

DONETSK, August 28 (RIA Novosti) – Donetsk militia forces claimed Thursday to have taken control of checkpoints and strongholds on the outskirts of Mariupol in southeastern Ukraine.

“Militia forces have taken control of block posts and strongholds on the edge of the city, as well as the bridge across the Gruzsky-Yelanchik River,” the headquarters of the self-proclaimed Donetsk People’s Republic’s (DPR) announced.

On August 24, the DPR began moving south to the Sea of Azov on the Russian-Ukrainian border.

On August 27, the DPR claimed they had moved tanks into Novoazovsk on the Sea of Azov.

On Wednesday, DPR representatives said they had taken 65 Ukrainian border control forces captive near the village of Ulyanivske as well as 24 servicemen near Petrivske.

Since April, Ukrainian authorities have been conducting a military operation against the independence supporters in eastern Ukraine who refused to recognize the legitimacy of new Ukrainian government.

Continuous shelling by the Ukrainian Army and attacks on residential areas have left many civilians dead, including children.

More than 2,000 people have been killed and more than 5,000 injured since the operation started, according to UN reports. The Donetsk authorities argue that civilian casualties account for about half of those deaths.

Moscow has repeatedly condemned Kiev’s military actions in the east of Ukraine, called for an immediate stop to the bloodshed and has stressed that the crisis can only be resolved through peaceful dialogue.