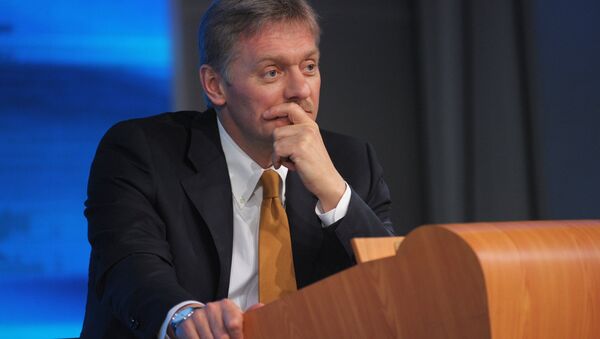 "These statements are nothing new, they are being voiced regularly, and Russia regularly refutes them, saying that this information is untrue," he said.

NATO Secretary General Anders Fogh Rasmussen mentioned in his recent statement "a major escalation in Russian military involvement in Eastern Ukraine since mid-August, including the use of Russian forces." The statement followed the entry of Russian humanitarian convoy into Ukraine.

He said Russian artillery support was used against the Ukrainian armed forces, as the NATO had allegedly "seen transfers of large quantities of advanced weapons, including tanks, armored personnel carriers, and artillery to separatist groups in Eastern Ukraine" and "an alarming build-up of Russian ground and air forces in the vicinity of Ukraine."

NATO, as well as a number of non-member countries suspected Russia of secretly transferring military equipment to militia in eastern Ukraine in the 280-truck convoy. Russia said it carried about 2,000 tons of humanitarian aid, including baby food, medication, grain, sugar, sleeping bags and other necessities. It set off from the Moscow Region on August 12, and reached Ukraine’s conflict areas 10 days later after a long delay at the border.

On Monday, the night before the meeting of the presidents of Russia, Ukraine, Belarus and Kazakhstan, as well as the European Union representatives, in Minsk, Kiev accused Russia of sending a column of tanks and other weapons across the border onto its territory. Russia dismissed the information as a rumor.

The West continues to say Russia is meddling in Ukrainian internal affairs, a claim that Moscow has repeatedly rejected.