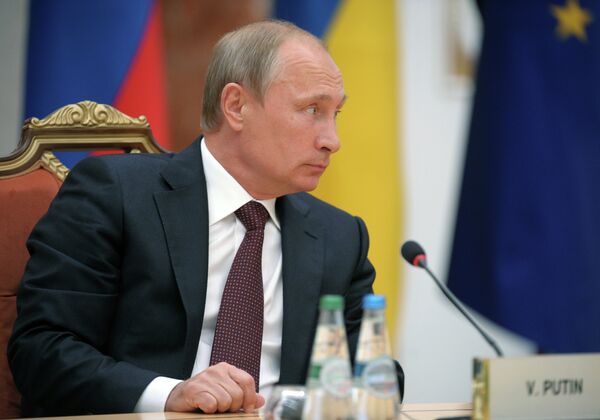 "Even within the Customs Union framework, embargoed goods are being actively re-imported to the Russian Federation from the European Union countries, namely via Belarus," Putin said.

"I know that the leadership of Belarus and its president are trying to prevent this negative practice."

The Russian leader added that exporters often replace an EU label with a new one and send the goods to Russia.

Putin proved his words by displaying photographs of a man removing a label, under which the initial producer country - Poland is revealed.

"The same will happen in Ukraine, [Russia] will be buried [in such goods]," Putin added.

Russia has banned food imports from the United States, the European Union, Canada, Australia and Norway in response to sanctions imposed on Russia over its alleged role in escalating the Ukrainian crisis. The list of banned products includes meat, fish, poultry and milk products, nuts, fruits and vegetables, but not infant foods or goods.

Earlier on Tuesday, Russia, alongside Ukraine, Belarus and EU member states, was participating in a multilateral meeting in Minsk that was dedicated to the discussion of acute issues, such as the crisis in Ukraine, the humanitarian situation in the east of the country, the possibility of talks between the Ukrainian government and the country’s eastern regions, as well as Ukraine’s association agreement with the European Union.