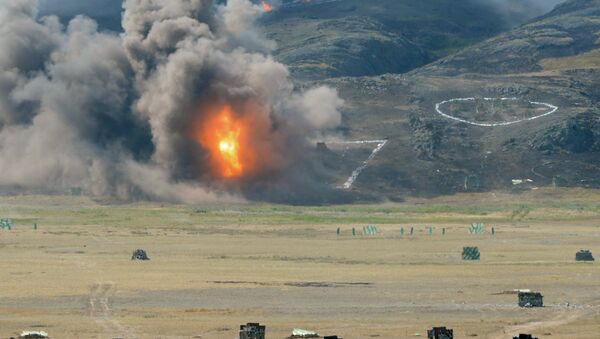 Artillery units from Russia’s Eastern Military District have held their first live-fire training drills with the use of Krasnopol laser-guided projectiles during the Peace Mission 2014 exercise in China, a Russian military spokesman told RIA Novosti on Monday.

The main stage of the Peace Mission joint anti-terrorist exercises of the Shanghai Cooperation Organization (SCO) armed forces is held August 24-29 in China. Troops from Russia, China, Kazakhstan, Tajikistan and Kyrgyzstan are participating in the exercise.

"During the task, the military personnel of the self-propelled howitzer battery of the EMD motorized infantry have hit the armored targets with precision missiles at the Chinese military firing range. In addition, the military used high-explosive ammunition equipped with radio controlled fuses. Exploding at a height of about 50 meters [164 feet], they have hit the designated targets. The firings were conducted at a range of 7 to 11 kilometers [4 to 7 miles]," Eastern Military District spokesman Col. Alexander Gordeyev said.

A battalion task force from the Eastern Military District’s 36th Separate Motorized Infantry Brigade and an aviation group from the 3rd Air Force and Air Defense Command are representing Russia at the drills.