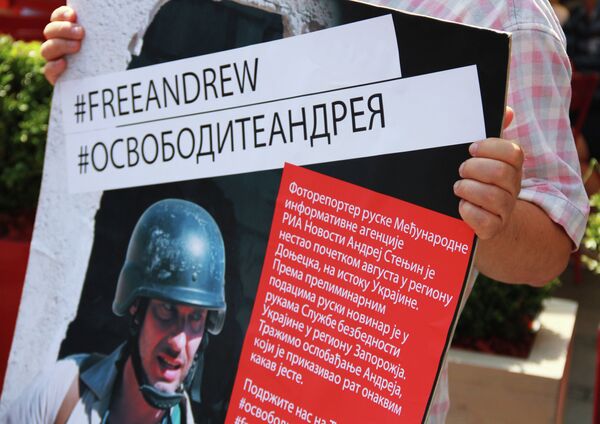 “There are three requirements. First is to get information about Andrei’s whereabouts. Second is that the authorities started investigation. And the third is to return him home," he said.

Press freedom conditions in Ukraine, especially in the volatile southeastern regions, have steadily deteriorated in recent months, with journalists being detained, attacked, abducted and killed.

Since August 5, colleagues have been unable to reach Stenin, who had been working in eastern Ukraine. On August 12, Anton Herashchenko, an aide to the Ukrainian interior minister, said in an interview with Latvian radio station Baltkom that Stenin had been arrested by the Ukrainian Security Service on charges of assisting terrorists.

Later Herashchenko claimed he was misinterpreted saying he only assumed the photographer had been detained but disclosed no precise information. Baltkom said it had a recording of Herashchenko’s interview and provided it to Rossiya Segodnya.

Russia has already filed two diplomatic notes to Ukraine over Stenin’s case urging Kiev to comment on Herashchenko’s statement but his location still remains unknown. The photographer is now on the Ukrainian militia’s missing persons list.