Moscow Blames Political Chaos in Libya on Forceful Democratization by US, NATO 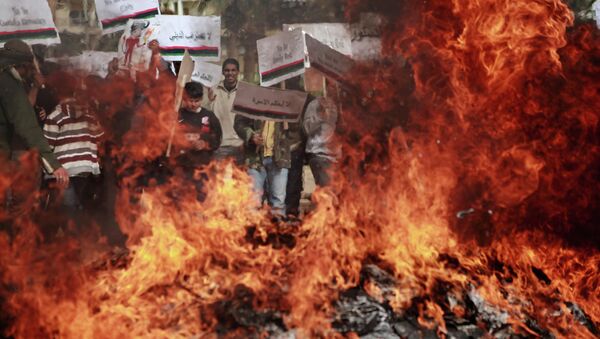 © Sputnik / Andrei Stenin
/
Go to the mediabank
Subscribe
International
India
Africa
The United States and its NATO allies caused the current political chaos in Libya by their attempts “to forcefully democratize the country,” the Russian Foreign Ministry said on Monday.

MOSCOW, August 25 (RIA Novosti) – The United States and its NATO allies caused the current political chaos in Libya by their attempts “to forcefully democratize the country,” the Russian Foreign Ministry said on Monday.

“We are convinced that the current chaos in Libya is a direct consequence of irresponsible interference by the US and its NATO allies into Libya’s internal political conflict, with an aim to overthrow the Muammar Gaddafi regime and forcefully democratize the country,” the ministry said in a statement.

“At present, the Libyans are paying for this, with thousands of lives lost and social infrastructure destroyed in the violent internal struggle,” the statement continues.

“We can now say for sure that the political process of creating a modern democratic state on the rubble of the Gaddafi regime, overthrown in 2011, is now completely deadlocked,” the ministry said.

The ministry also stressed that the situation in Libya is developing from “bad to worse”, with the “entire state power created during the post-revolution period being destroyed.”

In June this year, Libya’s new parliament was elected. However, the General National Congress, the former Libyan national legislature, did not recognize its legitimacy and resumed its previous functioning.

"Thus, there are two parallel parliaments and two cabinets of ministers in the country now. Moreover, none of these structures, apparently, has the capacity to establish effective control over the situation in the country," the ministry’s statement concluded.

Libya is currently facing its worst wave of violence since the 2011 overthrow of the country’s long-standing leader Muammar Gaddafi and the subsequent civil war. After the conflict, the country has seen violent clashes between numerous militias, armed with weapons seized from Gaddafi government ammunition depots. According to the Libya Body Count data, more than 1,100 people have been killed in 2014.