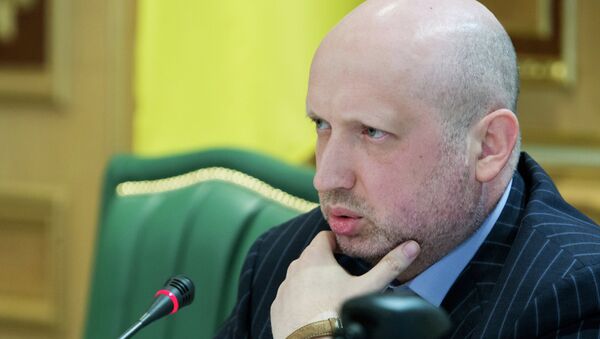 Ukrainian Parliament Speaker Oleksandr Turchynov said Sunday that Kiev was apparently planning to end its military operation in the restive eastern territories by October, citing the need to hold an early parliamentary election.

“I hope this [operation] zone will be cleared or reduced to a minimum by October,” Turchynov said in an interview to Ukraine’s Channel 5.

On July 24, the speaker announced that the coalition, which had been formed after the change of power in February, had been officially dissolved. It consisted of 262 MPs from ex-Prime Minister Yulia Tymoshenko’s Batkivshchina party, Vitali Klitschko’s UDAR, the nationalist Svoboda and several groups of parliamentarians that joined them.

The UDAR and Svoboda parties initiated the decision to allow the newly-elected President Petro Poroshenko to dissolve the “dysfunctional” parliament and announce early parliamentary elections.

Oleksandr Turchynov told Channel 5 that, ahead of the elections, Kiev might redraw constituency boundaries in the turbulent Donetsk and Luhansk regions so that local election committees had their headquarters in what he described as safer locations.

Turchynov claimed this could allow for a more transparent vote. He added however the parliament might fail to fill some 20 seats as a result.

Since mid-April, Kiev forces have been conducting a military operation in southeastern Ukraine, aimed at suppressing independence supporters who refused to acknowledge the new government that came to power following a February 22 coup.

According to UN reports, some 2,000 people have died and more than 5,000 have been injured in the military operation.

Moscow has described the crackdown as a punitive operation, calling on Kiev to put an immediate end to the bloodshed.