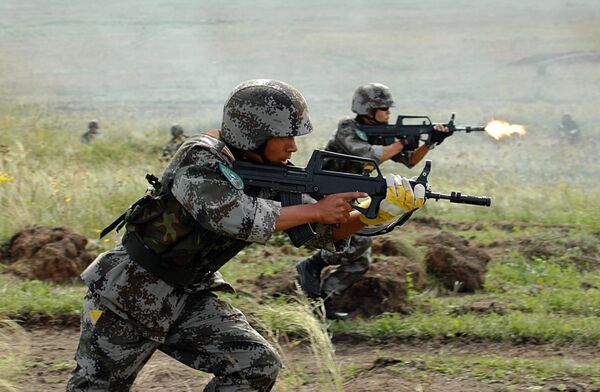 The beginning of the Peace Mission 2014 drill – to be held in China’s Inner Mongolia from August 24 to 29 – was marked by a flag-raising ceremony at China’s largest and most modern Zhurihe base.

The war games are aimed at honing multilateral decision-making and military cooperation in a bid to ensure regional stability and promote SCO’s agenda worldwide.

“Today our countries have closed their ranks in the fight against terrorism, extremism and separatism, and are now pursuing common goals to ensure security in the region,” Lt. Gen. Vladimir Tsilko said in his speech.

Russia has brought over a thousand of its servicemen, as well as 60 armored vehicles – 40 personnel carriers, 13 T-72 tanks – and over 20 artillery systems, including self-propelled guns SAU 2S3M and multiple rocket launchers BM-21, also known as Grad.

In early August, Russia also dispatched eight Mi-8 helicopter gunships that will back its ground combat troops during the practical phase of the maneuvers, four Su-25 fighters and two military transport aircraft Il-76.

On August 25, 2003, China for the first time opened its Zhurihe training base to foreign militaries. The base covers an area of about 1,000 square kilometers (386 square miles).