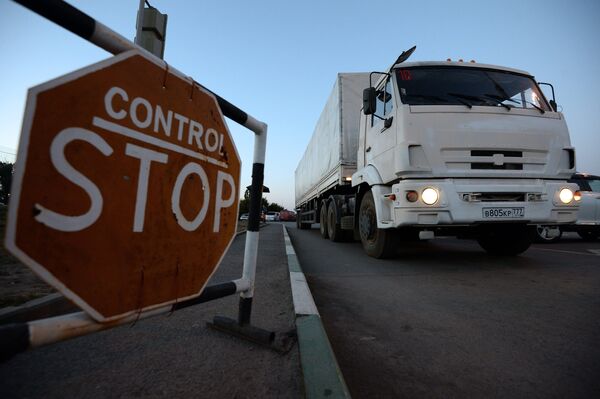 Russia’s Defense Ministry has denied NATO’s “another portion of accusations” against Russia, now of direct military involvement in Eastern Ukraine, including the use of Russian forces, hardware and artillery.

MOSCOW, August 23 (RIA Novosti) - Russia’s Defense Ministry has denied NATO’s “another portion of accusations” against Russia, now of direct military involvement in Eastern Ukraine, including the use of Russian forces, hardware and artillery.

“We no longer pay attention to the allegations made by Mr. [Anders Fogh] Rasmussen and his press secretary. There is no sense to comment on them. Again, nothing more that Twitter,” ministry spokesman Maj. Gen. Igor Konashenkov said.

“These developments are even more worrying as they coincide with a major escalation in Russian military involvement in Eastern Ukraine since mid-August, including the use of Russian forces,” NATO Secretary General Anders Fogh Rasmussen said Friday condemning entry of Russian humanitarian convoy into Ukraine.

“In addition, Russian artillery support – both cross-border and from within Ukraine – is being employed against the Ukrainian armed forces. We have also seen transfers of large quantities of advanced weapons, including tanks, armored personnel carriers, and artillery to separatist groups in Eastern Ukraine. Moreover, NATO is observing an alarming build-up of Russian ground and air forces in the vicinity of Ukraine,” Rasmussen said.

“If NATO really wants to know the truth behind the Russian humanitarian mission, including the degree of ICRC’s ‘involvement’ or ‘non-involvement’, we recommend that they contact [ICRC] headquarters,” the ministry said.

The Russian Foreign Ministry reminded that Moscow received a formal agreement from Kiev authorities for the passage of the humanitarian convoy through the Ukrainian border on August 12.

On August 14, the trucks with Russian humanitarian aid arrived at the border, but Ukraine began customs clearance only on August 21.