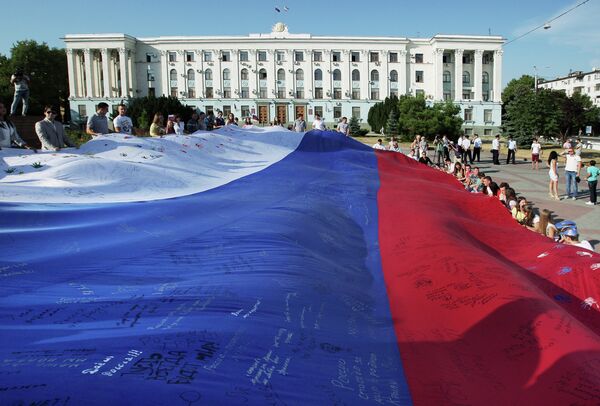 The history of the Russian tricolor flag stretches back more than 300 years. The Russian national flag appeared at the turn of the 17th and 18th centuries as Russia was emerging as a powerful state. The white, blue and red flag was raised for the first time on the first Russian warship, the Oryol, during the reign of Peter the Great’s father, Alexei Mikhailovich.

Peter the Great is recognized as the legitimate "father" of the Russian tricolor flag. On January 20, 1705, he issued a decree that stated that "all merchant ships" should raise white, blue and red flags, and personally drew a design of the flag and specified the order of its horizontal stripes.

Beginning with the first Russian warships, the Russian flag remained part of naval culture until the 19th century. The Russian tricolor flag was first used on land in the course of geographical discoveries made by Russian navigators. 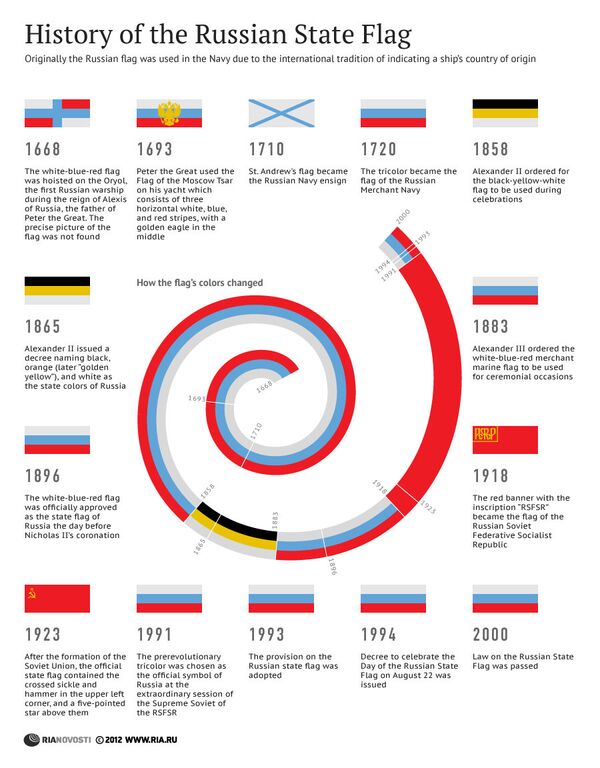 Before the 19th century, Russian seafarers would erect a memorial cross on the shore of lands newly annexed to Russia. However, in 1806, a new tradition took root. A Russian expedition was exploring the southern Sakhalin coast and raised two flags on the shore. The St. Andrew’s flag celebrated the glory of the Navy, while the white, blue and red flag marked new Russian property.

Further use of the white, blue and red flag was suspended in 1858, when the Heraldic Office of the Senate’s Heraldry Department came up with an initiative to change the appearance of the Russian national flag.

The same year, Tsar Alexander II approved a design "with black, yellow and white colors reminiscent of the imperial coat of arms that were used in banners, flags and other street decorations during festive occasions." On January 1, 1865, Alexander II issued a decree in which black, orange (golden) and white were explicitly designated "the national colors of Russia."

The black, yellow and white flag remained in use until 1883. On April 28, 1883, Alexander III issued a decree, which stated: "On occasions when buildings may be recognized as suitable for decoration with flags, the Russian flag with three stripes — white at the top, blue in the middle and red at the bottom — shall exclusively be used."

Officially, the white, blue and red flag was approved as the state flag of Russia in the run-up to the coronation of Nicholas II in 1896.

The three colors of the national flag received an official interpretation. Red represented a great power, blue stood for the color of the Holy Mother who protects Russia, and white was the color of freedom and independence. These colors also represented the commonwealth of White Russia, Little Russia and Great Russia.

The red banner served as the state flag in Soviet Russia for more than 70 years. An extraordinary session of the Supreme Soviet of the RSFSR resolved on August 22, 1991, to consider the tricolor flag Russia’s official symbol. A presidential executive order of December 11, 1993, approved the guidelines "Regulations on the National Flag of the Russian Federation."

The current unofficial interpretation of the colors is as follows: white represents peace, purity, integrity and excellence; blue is the color of faith, loyalty and constancy; red symbolizes energy, strength and blood shed for the Fatherland.

The national flag of the Russian Federation is raised at all times on the buildings of the presidential administration, the Federation Council, the State Duma, the Russian Government, the Constitutional and Supreme courts, the Prosecutor General’s Office, the Investigative Committee, the Central Bank, the Audit Chamber, the residence of the Russian Human Rights Commissioner and the Central Election Commission.

The flag also flies at all times, alone or with other appropriate flags, on buildings of federal bodies of executive power, the residencies of presidential envoys in the federal districts and government buildings of the regional and local authorities.

The flag is raised on the buildings of local governments, public associations, enterprises, institutions and organizations regardless of ownership, as well as on residential buildings on national holidays of the Russian Federation.

On days of mourning, a black ribbon, the length of which is equal to the length of the flag, is attached to the upper part of the pole of the state flag. The flag is raised half-mast.

Thee national flag of the Russian Federation is raised during official ceremonies and other special events.

On November 8, 2008, President Dmitry Medvedev signed the federal law "On Amendments to the Federal Constitutional Law On the National Flag of the Russian Federation."

The law was amended to include Article 9-1, which distinguishes between the formal and informal use of the Russian flag and its image. It was established that official use of the flag shall be performed in a manner and in cases stipulated by law. The flag, including images of it, may be used by citizens, public associations, enterprises, institutions and organizations in other cases as well, as long as such use does not constitute a desecration of the national flag.