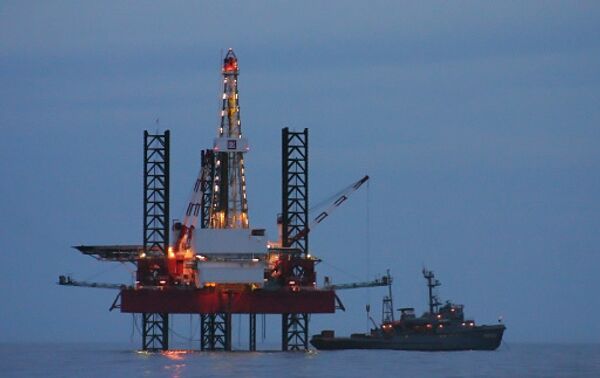 The US-imposed ban on the export of technology to Russia won’t be able to halt the development of Russian natural gas and offshore oil extraction projects, as Russian companies are already well-versed in import substitution.

MOSCOW, August 22 (RIA Novosti) — The US-imposed ban on the export of technology to Russia won’t be able to halt the development of Russian natural gas and offshore oil extraction projects, as Russian companies are already well-versed in import substitution. However, European companies will be affected by the “boomerang effect” of these sanctions.

Sanctions against Russia’s energy sphere limit the export of equipment for deep-sea drilling, shale oil extraction and the development of Arctic natural resource deposits. If these sanctions had been imposed on Russia a few years ago, the impact would’ve been quite considerable. Now, however, the sanctions will neither be able to affect Russian natural gas and offshore oil extraction projects, nor will they stop it from drilling for shale oil. The worst that could happen is a slight delay before these projects start operating at peak capacity.

In the Soviet Union, offshore extraction was in an embryonic state, mostly because there were plenty of land-based deposits that were easier to exploit. Soviet oil workers were operating at Caspian Sea deposits and on the sea shelf of Vietnam. Interestingly enough, while US geologists were unable to find any oil on South Vietnam’s sea shelf, the Soviet specialists managed to accomplish this feat in 1975.

In the 1990s, two major projects, Sakhalin-1 and Sakhalin-2, were launched on the Sea of Okhotsk shelf with help from US, British, Japanese and Indian companies. Rosneft was the principal shareholder of Sakhalin-1 and Gazprom was the key shareholder of Sakhalin-2. Russian companies began familiarizing themselves with foreign offshore extraction technology. Meanwhile, Lukoil was developing the Caspian Sea offshore deposits, with and without the foreign companies’ assistance.

Early this year, Gazprom Neft started oil extraction at the Prirazlomnoye field in the Pechora Sea, and it was accomplished without any assistance from foreign oil companies. The ice-resistant Prirazlomnaya platform was built by the Sevmash factory in Severodvinsk. The oil was loaded on to the Michael Ulyanov, an Arctic tanker built at the Admiralty Shipyard in St. Petersburg.

Moreover, last year Gazprom started extracting oil at the Kirinsky field off Sakhalin, where for the first time in Russia an underwater extraction complex was used instead of an offshore platform. Obviously, foreign-made equipment was also used in all of these projects. But now that our companies have this equipment and have studied the requisite technologies, they can be copied and adapted to Russian climatic conditions; this process is already underway. We can always seek assistance from countries that ignore the American-imposed ban but have experience with deepwater drilling, like Brazil.
However, it should be noted that the Americans themselves don’t appear to be eager to actually implement the sanctions. In early August, the drilling of an initial exploration well began in the Karsk Sea as part of a joint project between Rosneft and Exxon. The Europeans, who were forced by the US to implement sanctions against Russia, were shocked by this development.

It is no secret that Russia-US trade turnover is relatively limited, so the United States does not stand to lose much economically as a result of the deterioration of relations with Russia. The EU countries, on the other hand, have already taken significant losses. First the European companies discovered that Russian companies became reluctant to place orders in Europe out of fears of new sanctions. When the EU actually did join the US in imposing sanctions; Russia retaliated by refusing to purchase foodstuffs from Europe. The Europeans were shocked, having lost about $10 billion. This provides quite a background for Exxon’s Glenn Waller to describe the bright future of the joint venture with Rosneft in offshore drilling.

A similar situation exists with respect to the shale oil extraction area. Gazprom Neft, Surgutneftegaz, Lukoil and Rosneft are already exploring the deposits of the Bazhenov Formation, with and without foreign partners. There is an ongoing transfer of technology that cannot be stopped. One could try to stall this process but the chances would be slim. The thing is, there are companies from all over the world, including Chinese and Indian companies, which are engaged in extracting shale hydrocarbons in the US. If necessary, Russian companies might entice them into participating in joint projects.

Russian companies have been working on import substitution for a long time. Gazprom was very successful at it, as the corporation now purchases 95 percent of required equipment from domestic manufacturers. As a result, new high-technology manufacturing facilities have appeared in Russia. In the 1990s no heavy-gauge pipes (which are required for building pipelines) were produced in Russia, so they had to be ordered from Germany, Japan, Ukraine and other countries.

Now Russian companies like Vyksunsky Metalworks, Tchelyabinsky Pipe Plant, Volzhsky Pipe Works and Izhorsky Pipe Works are the ones supplying Gazprom with heavy-gauge pipes. Russian factories are now capable of producing not just pipes, but the high-quality steel that many industrial sectors require.

In the Soviet Union, most of the gas compressor units were manufactured abroad. The only factories in the USSR which were capable of building them were the Nevsky factory in Leningrad and Frunze Scientific and Production Center in Sumy, Ukraine. Meanwhile, the most reliable engines for the compressor units were manufactured by Zorya Production Center in Nikolaev. So starting in the 1970s, the Soviet natural gas industry was mostly using equipment produced by Ukrainian factories to outfit compressor units. When Ukraine became independent, Gazprom started working on increasing the production volume of gas compressor units in Russia, so now only 5 percent of such equipment has to be imported from abroad.  Russian factories such as Iskra-Turbogaz, Samara-Aviagaz and ODK manufacture equipment that meets all of the contemporary global standards.

Russian companies can now manufacture new types of pipeline fittings and valve actuators. Volgogradneftemash, Penztyazhpromarmatura, Tyazhpromarmatura (Tula region) and Atommasheksport (Rostov region) were especially successful in this area – the equipment manufactured by these companies allowed Russia to create a domestic alternative to that produced by Mokveld Valves, for example.

US and European banks have also imposed sanctions against Russian companies, but that doesn’t mean that other foreign banks won’t be willing to provide loans in their stead. Furthermore, Russia invested over $100 billion in US government securities with a minimum rate of return. It would be better to spend this money on loans to Russian companies. Such a policy could jump-start the development of the Russian economy, while procuring a more favorable rate of return for the government.

It is obvious that the US is attempting to use these anti-Russian sanctions to maintain global hegemony, though this plan is unlikely to succeed. I often travel to Germany and deal with local businessmen. This spring, before the sanctions were enacted, people I talked to said that never before in the history of Germany had there been a more heated confrontation between the government and industry. The European politicians are usually dependent on the US and cater to its needs. On the other hand,  European companies provide funding for their election campaigns, and European industrialists are not happy when their interests are being sacrificed for the sake of the political goals of foreign countries. It became especially apparent now that the EU economy is facing a crisis and European companies often cannot compete with their Chinese counterparts. This is why, despite tremendous political pressure from the US, France has refused to break its contract to provide a Mistral-class helicopter carrier to Russia. It’s simple logic: Europe needs a partnership with Russia in order to survive, while only the US needs a conflict between Russia and the EU.

Meanwhile, the US itself is in bad shape. The country’s foreign debt, and that of its chief allies, the UK and Japan, is way over 100% of its GDP.  It’s obvious that none of these countries is capable of paying back such a debt, and they’re all going to face bankruptcy sooner or later. Furthermore, the US defense budget is nearly equal to the military spending of all the other countries combined. America’s industrial capacity is mostly aimed at producing military equipment, as most civilian product manufacturing has been outsourced to foreign countries with cheaper workforces. This is exactly why the US keeps waging wars abroad: all these bombs and missiles must explode, otherwise the warehouses will be overflowing with them and people will start losing jobs, the military-industrial complex claims.

It should be noted that despite the increase in oil production output, the US still depends on oil imports. Oil consumption in the US reached 831 million tons in 2013, with about 50 percent of that amount being imported. According to a forecast made by the Energy Research Institute of the Russian Academy of Sciences, in 2020 the US will reach peak oil extraction capacity (526 million tons). Afterwards,  stagnation will begin, and by 2040 the output will decrease to 516 million tons. So the Americans will have to keep importing oil.

In order to ensure its world hegemony, the US keeps fomenting chaos all over the world, but this chaos already affects their allies, both in Europe and in the Middle East. China is America’s chief rival today, but because of their high mutual trade turnover, the Americans are reluctant to slap it with sanctions. Instead, the US decided to make an example of Russia, but this policy has antagonized its European allies who depend on trade with Russia. Meanwhile, Russia strengthens its ties with countries that seek to pursue an independent foreign policy. As a result, Russia’s international influence waxes while US international influence wanes.

Director of the National Energetics Institute