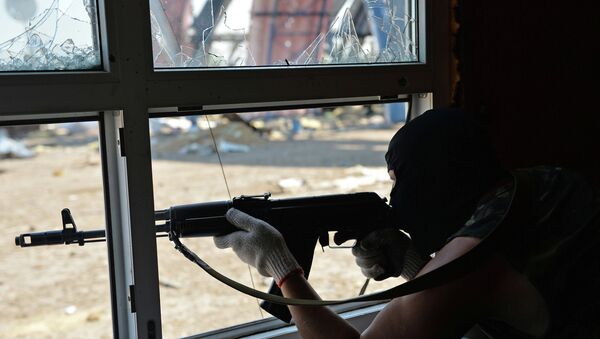 The military conflict in southeastern Ukraine has been the focus of politicians, the military and journalists around the world for almost six months now.

MOSCOW, August 21 (RIA Novosti) - The military conflict in southeastern Ukraine has been the focus of politicians, the military and journalists around the world for almost six months now. The world is divided between supporters of Kiev’s new government and those who support the self-defense forces in the southeast.

The Western countries unanimously support the Ukrainian government economically, politically, and via the flow of information. Moreover, there are regular reports of foreign recruits from the US, Italy, Georgia and some other countries fighting in the Ukrainian army and in its National Guard.

However, even among Western countries that have been caught in an information war against  southeastern Ukraine and Russia, there is support for the self-defense troops of the Donetsk and Lugansk people’s republics. They are willing to lend moral support and even personally help the people of Novorossiya. Some are even eager to enlist.

Several days ago, several French volunteers contacted RIA Novosti. They’d just arrived in  southeastern Ukraine and already felt compelled to tell their first-hand stories about the civil war there to the people of France. What other reasons led them to fight for the besieged people’s republic? They told Sergei Safronov, Head of the Security Agencies Newsdesk, their reasons for taking up the fight.

First of all, please introduce yourself and tell us what brought you to Ukraine.

Guillaume: My name is Guillaume. There are four of us from France; the others are Michel, Victor and Nicolas. We are French volunteers and basically the first wave of an entire group of our fellow citizens, who are either preparing for a trip to Ukraine or are already on their way.

Are there any more French people in Donetsk?

Guillaume: No, but I hear there are some Spanish people. We haven’t seen them yet.

Did you bring a weapon? Are you from the military or are you civilians?

Guillaume: Of course we did not bring any weapons, but we received some from the militia. These are personal service firearms. We are not servicemen at all; we are civilians – basically political volunteers.

Guillaume, you still haven’t mentioned your reasons for going to Ukraine. Why are you here?

Guillaume: We support the geopolitical idea of European unity. We are both revolutionaries and traditionalists. We came to Donbas, where civilians are being killed by agents from Kiev. Those who are conducting this terrorist operation in Donbas are the henchmen of the international mafia oligarchs.
You should clearly understand it is the third world war going on. It started in Libya then moved to Syria and now to Donbas. We can see that Russia is one of a small number of countries that challenged and is almost single-handedly fighting international globalism. It is some kind of a Reconquista. We are here to help Russia in this fight.

Do you get paid?

Guillaume: No, we are not here to make money; no one pays us. Moreover, we paid quite a lot to get here.

How long do you plan to stay here?

Guillaume: For as long as it is necessary to inform the people of France about what is happening here.

Do your family and friends know where you are?

Guillaume: We told a small circle of friends. France doesn’t know we are here. France doesn’t even know that Donbas is at war. The Western media do not report anything. On the contrary, the Western media present Russia as an enemy, an aggressor, a terrorist country. They don’t say anything about the war in Ukraine.
Our presence here will allow the French to receive first-hand information.

Have you already taken part in military operations?

Guillaume: Not yet, but we are ready to take part. It is one of the reasons why we are here.

Where exactly are you?

Guillaume: We are in Donetsk, the Donetsk People’s Republic.

Guillaume: With sounds and gestures.