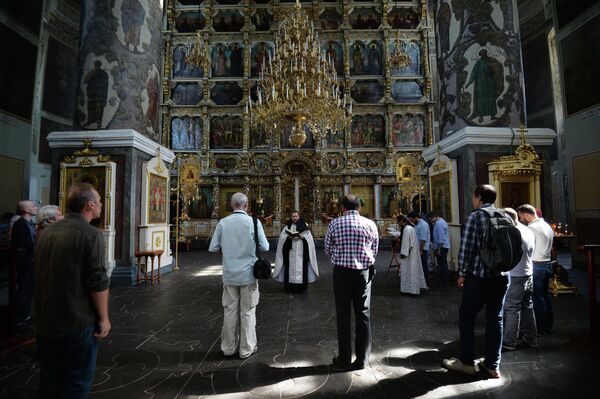 © RIA Novosti . Vladimir Pesnya
/
Go to the photo bank
Subscribe
Hegumen Nikon (Golovko) read a prayer in the Donskoy Monastery, Moscow, on Wednesday for the health of a Rossiya Segodnya journalist who went missing in Ukraine and his safe return home.

MOSCOW, August 20 (RIA Novosti) – Hegumen Nikon (Golovko) read a prayer in the Donskoy Monastery, Moscow, on Wednesday for the health of a Rossiya Segodnya journalist who went missing in Ukraine and his safe return home.

Several dozen people, journalists, colleagues, friends and acquaintances of Andrei Stenin attended the service at the Grand Cathedral of the monastery.

"It is common to pray to Saint Nicholas in times of trouble, and of course when people are missing in the first place, since he is known for quick intercession and assistance for people," Hegumen Nikon said.

After the service, the hegumen read a special prayer to grant peace to Ukraine and all Slavic peoples that the Patriarch of Moscow and All Russia Kirill blessed for every believer to read in all churches of the Russian Orthodox Church.

"Let us pray again and again for the unification of Slavic peoples. Let us not look for enemies in those who are, in fact, our brothers, even if they are distant ones – cousins, second cousins, not to mention the fact that we are all brothers and sisters in Adam," the hegumen said.

Since August 5, Stenin’s colleagues have been unable to reach the photographer who had been working in eastern Ukraine. Sources claimed that the photographer had been detained by the Ukrainian Security Service (SBU) in Zaporizhia Region in southern Ukraine, a claim later denied by Kiev.

Donskoy Monastery was founded in 1591 and named in honor of the Our Lady of the Don icon, which was used in 1380 by St. Sergius of Radonezh, who blessed the army of Prince Dmitry Donskoy in the Battle of Kulikovo, according to legend. The monastery was built on the site where the Russian Army awaited battle with the Tartar hordes, and where there was a small church camp with the Our Lady of the Don icon.

All those who care about the fate of the photographer can support the Rossiya Segodnya campaign. To take part, tape over your camera lens with a sticker and write #freeAndrew on it. After that, take picture of yourself holding the camera and post it on your website or a personal page on a social network.

Organizers of the "Tape Over Camera Lenses" campaign are to provide informational support until Andrei Stenin is freed, by posting materials on the RIA Novosti website at http://en.ria.ru.

The more people join the campaign, the greater and more noticeable the support for Rossiya Segodnya photojournalist Andrei Stenin will be.

Stenin had been working in eastern Ukraine and has been unreachable since August 5. According to preliminary information, Stenin was arrested and held by the Security Service of Ukraine. The Russian government, Russian and international social and professional organizations, Rossiya Segodnya, human rights activists and many people in Russia and globally are doing everything they can to spur Stenin’s immediate release.

Please support Andrei Stenin’s release by sharing the hashtag #freeAndrew in social networks. Andrei is a professional war photographer reporting from the most dangerous war zones in the world. You can view Andrei’s pictures from Iraq, Egypt, Syria, Libya here and his most recent shots from eastern Ukraine here.