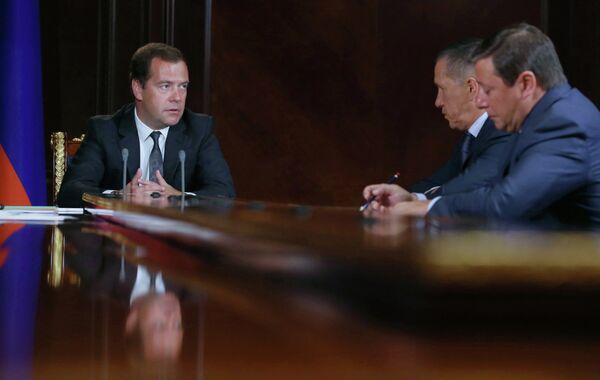 "Naturally, this document should not be to the detriment of Russian consumers or seriously affect food markets. And, certainly, it should not lead to deficit or price growth," the prime minister said, adding that he instructed ministers and regional authorities to closely monitor the situation.

"I would like to reiterate that, naturally, Russia had to take these reciprocal measures. I hope they will not last long," Medvedev said.

The prime minister added that he saw "certain positive aspects" in the current situation, which may "shake up the domestic market" and boost competition.

On August 7, Russia imposed a one-year ban on agricultural and food product imports from the countries that had imposed sanctions on Moscow over the Ukrainian crisis, namely Australia, Canada, the European Union, the United States and Norway. The list includes meat, poultry, fish, seafood, milk, dairy products, as well as fruits and vegetables.

Moscow said it was ready to review the terms of its import restrictions if its Western partners showed a commitment to dialogue.

The United States and European Union have been imposing sanctions on Russian officials and companies since Crimea’s reunification with Russia in March, accusing Moscow of meddling in Ukraine’s internal affairs.