Russian Cosmonauts Conclude Science-Oriented Spacewalk One Hour Ahead of Schedule 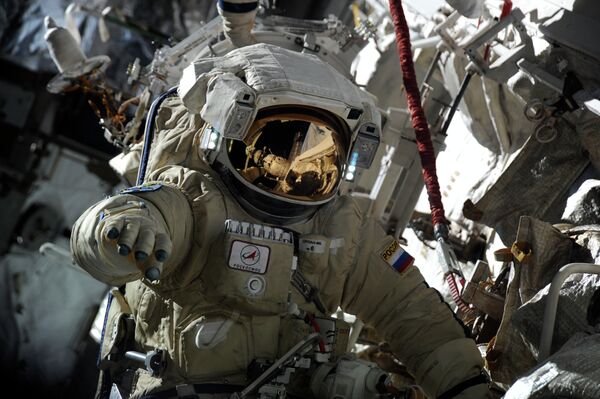 Russian cosmonauts Alexander Skvortsov and Oleg Artemyev have successfully concluded a spacewalk focused on science experiments placed on the exterior of the International Space Station (ISS) over one hour ahead of schedule, Russia’s Federal Space Agency Roscosmos said Monday.

“The exit hatch [of the docking compartment Pirs] was closed on August 18, 2014 at 23:12 Moscow time [19:12 GMT]. Alexander Skvortsov and Oleg Artemyev have carried out open space works for the second time during the expedition. The extravehicular activity lasted approximately 5 hours and 10 minutes,” Roscosmos reported.

The first task the cosmonauts undertook was the launch of the NS-1 nanosatellite. The 1.5-kg satellite, unofficially dubbed the Peruvian CubeSat Chasqui-1, will transmit photographs and telemetry back to Earth for further academic study by students from Radioscaf, an educational program.

As part of the spacewalk, Skvortsov and Artemyev mounted the Expose-R, an experimental unit, on the station’s hull. The unit will gather data on the long-term influence of exposure to outer space on the survival of bacteria, fungi, plants and animals.

Russian astronauts photographed the thermal shield of the outer surface of the Russian segment of the ISS. They also isolated and retrieved a Biorisk experiment container, which analyzed how microbial growth affects materials in space.

According to NASA, this is the 181st spacewalk devoted to ISS assembly and maintenance since construction of the space outpost began in 1998; it is the fourth so far this year.