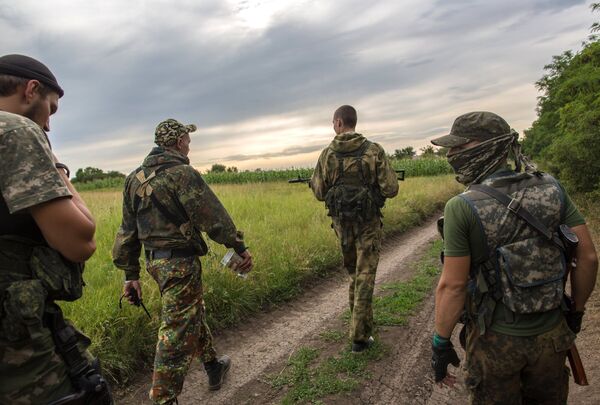 "One of the commanders of the 25th Airborne Brigade took his infantry combat vehicle and switched to our side. As of today, he has assumed command of the troop. And such cases are numerous," Zakharchenko said, adding he expected more brigades to yield themselves prisoners.

The prime minister and former battalion commander explained the mass switches to the militia side saying the Ukrainian forces did not understand "why they are here, what they are fighting for and what they are dying for."

"Whereas we fight for our land, our children, our homes. We are on our land, we have something to fight for. The moral spirit of any subdivision that fights for its home is a step above that of a subdivision fighting for money without the understanding of what it is fighting for," he said.

In June, Ukrainian troopers from Lviv and Dnipropetrovsk fought against each other at the Luhansk airport.

Since the start of Kiev's special operation in eastern Ukraine in mid-April, a total of 1,367 people have been killed and another 4,087 wounded, including 2,589 civilians and 29 children, according to a report by the United Nations Office for the Coordination of Humanitarian Affairs (OCHA). At least 117,000 people have been forcibly displaced.