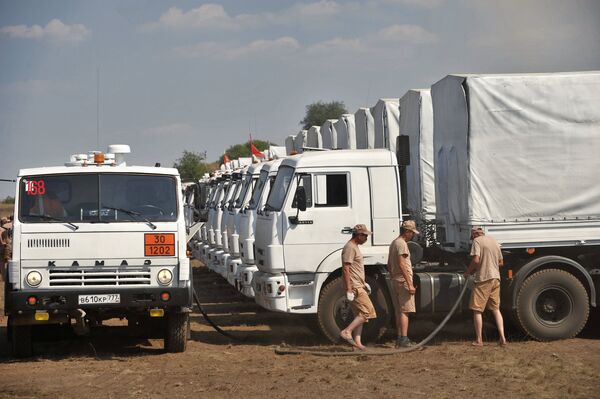 “On August 15, at 10:00 a.m. local time [07:00 GMT] the process of customs was begun at the Donetsk border crossing in the Russian Federation. Ukraine has 59 specialists, of whom 41 represent Ukraine’s State Border Control and 18 employees from Ukraine’s Customs Service, involved in the process,” the center said.

According to preliminary information, the cargo is to be sent to Luhansk.

Members of Russia’s Emergencies Ministry escorting the aid are currently in talks with Ukraine on the handover of the cargo. A source familiar with the situation told journalists the main issue is over Ukraine’s position.

Earlier in the day, members of the press, including from the BBC, Bloomberg, Reuters, The Associated Press and Agence France-Presse, were allowed to inspect the content of the trucks, currently located near the city of Kamensk-Shakhtinsky in Rostov Region.

The 280 trucks sent by Russia to eastern Ukrainian regions are carrying about 2,000 tons of humanitarian aid, including 400 tons of grain, 100 tons of sugar, 62 tons of infant food, 54 tons of medical supplies and medication, 12,000 sleeping bags and 69 mobile electrical generators.