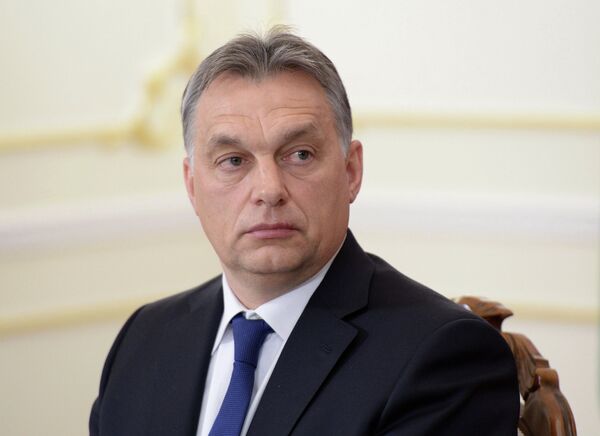 "The sanctions policy pursued by the West, that is, ourselves, a necessary consequence of which has been what the Russians are doing, causes more harm to us than to Russia. In politics, this is called shooting oneself in the foot," Orban said.

"The EU should not only compensate producers somehow, be they Polish, Slovak, Hungarian or Greek, who now have to suffer losses, but the entire sanctions policy should be reconsidered," Orban added. The prime minister also stressed his willingness to try to alter Brussels’ policy of imposing anti-Russian sanctions and urged other leaders to join him.

Russia is one of Budapest’s key trading partners. In 2013, Russia was Hungary’s second-largest source of goods, accounting for 9.3 percent of imports, according to Observatory of Economic Complexity data.

The European Union and the United States have been imposing economic sanctions against Russia since its reunification with Crimea in March. The West did not recognize the independence referendum that allowed the peninsula to become part of Russia, while Moscow says the vote was legitimate. Responding to the latest wave of sanctions, Russia imposed a one-year ban on the import of a range of agricultural and food products from the United States, the European Union, Canada, Australia and Norway.