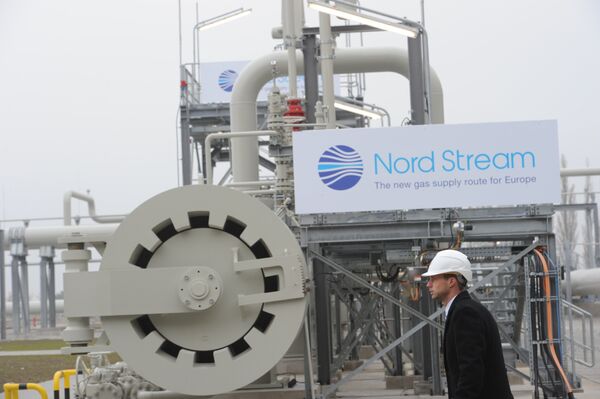 The only reasonable reaction in light of the crisis in Ukraine and West-imposed sanctions is that Russia completely cuts off energy deliveries to Europe, be it through Ukraine, or North Stream, says Francis Boyle, distinguished Professor of Law, in an interview to radio VR. He is certain this would help avert a potential massacre in Donbass, where Russia is now sending humanitarian relief. 280 aid-loaded Russian Kamaz trucks are heading to the Ukrainian border.

MOSCOW, August 14 (RIA Novosti) -  The only reasonable reaction in light of the crisis in Ukraine and West-imposed sanctions is that Russia completely cuts off energy deliveries to Europe, be it through Ukraine, or North Stream, says Francis Boyle, distinguished Professor of Law, in an interview to radio VR. He is certain this would help avert a potential massacre in Donbass, where Russia is now sending humanitarian relief. 280 aid-loaded Russian Kamaz trucks are heading to the Ukrainian border.

The move may bring about different scenarios, though. The most favorable one for Europe seems to be that of Ukrainians shelling the convoy, which could be a pretext for a new war, the expert argues.

“Russian humanitarian relief convoy heading to the border of Ukraine could well be fired upon by Ukrainian forces. And at that point anything could happen.”

Mr. Boyle says “his advice to Vladimir Putin” would be to trump the European sanctions by cutting off all gas supplies to Europe “completely and immediately”. He expresses certainty the move is well justified on the grounds of article 1 of the Genocide Convention, which Russia, Ukraine and all of Europe are all parties of.

Mr. Boyle says this requires all the states involved “to undertake, to prevent and to punish genocide”. At this point President Putin would have excellent legal ground to cut all the gas supplies to Ukraine and Europe, and thus stop the fall of Donetsk and Luhansk, he adds.

The fall of the predominantly Russian speaking cities would lead straight to an egregious massacre of their Russian-speaking residents, which must be stopped once and for all.

Cutting off gas supplies to Europe would be completely lawful, Mr. Boyle argues, citing his personal experience, as he worked in former Yugoslavia and stood on guard of the Bosnians’ interests in the 1992-1995 war.

“I was a lawyer for Bosnia Herzegovina during the war, I argued their case for genocide in a war court. I won two war court orders against Yugoslavia, to cease acts of genocide against Bosnia. I am currently the attorney of record for the mothers of Srebrenica, many of the women who survived that massacre.” Mr. Boyle points to the examples of Karadžić  and Mladić, who are currently on trial in the International Criminal Tribunal for the former Yugoslavia for genocide. “This is exactly what Ukraine is doing to Donetsk and Luhansk,” he states.

He says there’s no time to waste and Russia has by all means to respond in light of the latest wave of sanctions imposed on the country. “I think President Putin should undertake this step immediately first to prevent the fall and massacre in Donetsk and Luhansk, and then second, who knows what will happen when that humanitarian relief convoy arrives at the border? It’s a thousand kilometers, maybe two days at best, and the Ukrainians could start shelling it.”

Professor Boyle notes that Europe is aiding and abetting Ukraine to commit genocide against the Russian speakers in Ukraine in violation of Article 3 Paragraph E of the Genocide Convention “Complicit in Genocide”.

The only way to “bring Europe to senses” and stop the Donbass siege is to cut off gas supplies, he reiterates. By vilifying President Putin the western world is apparently looking forward to waging a new war, and the chances are it will happen, says the expert. If the convoy is shot at and Putin is thus forced to send the troops to Ukraine, this is an appropriate scenario for the EU, and NATO forces will shortly start “pouring into Ukraine”. “There’s no question about that, they are already arrayed all around Ukraine”.

Mr. Boyle finds the case similar to what they [the US] did to Saddam Hussein when it pushed him into invading Kuwait, while President Bush Senior used this as a pretext to place 500,000 troops on the Iraqi territory. “They want to soccer President Putin into invading, or entering, Ukraine, however you want to call it, with military forces”. Russia will thus fall into the trap, he says.

Violence in eastern Ukraine has intensified in the recent time, with the UN saying some 2,086 people have been killed since the conflict began in mid-April. There has also been a surge in the number of Ukrainian refugees who continue to flee to Russia. As of August 11, they numbered more than 51,000 people. According to the UN, about 730,000 have chose to leave their homes and head for Russia since early 2014.