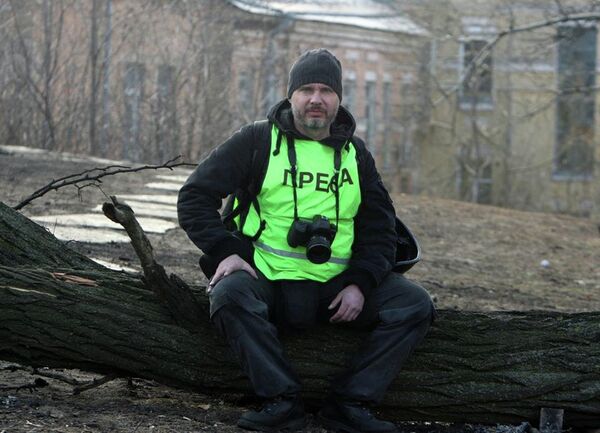 © RIA Novosti
Subscribe
A week after the mysterious disappearance of Russian photojournalist Andrei Stenin in eastern Ukraine, a senior security official in Kiev shed some light on the reporter’s whereabouts, saying he had likely been seized by the country’s Security Service SBU.

MOSCOW, August 13 (RIA Novosti) – A week after the mysterious disappearance of Russian photojournalist Andrei Stenin in eastern Ukraine, a senior security official in Kiev shed some light on the reporter’s whereabouts, saying he had likely been seized by the country’s Security Service SBU.

“He [Stenin] was arrested by our security services," Anton Herashchenko, an aide to Ukraine’s minister of internal affairs, said in an interview with Baltkom radio. “We think that Andrei Stenin may be guilty of helping terrorists."

The Rossiya Segodnya journalist went missing while on mission in eastern Ukraine a week ago. An unnamed source told RIA Novosti that the photojournalist had been kidnapped by pro-government troops and was in the custody of Ukraine’s Security Service in the city of Zaporozhye, an allegation the SBU later denied.

A short time after his sensational confession, Ukraine’s Anton Herashchenko denied having any information on Stenin. The adviser told a RIA Novosti journalist that his comments had been taken out of context and that he was unaware of the journalist’s whereabouts.

A source in the know earlier told RIA Novosti that Kiev was building a case against the arrested Russian journalist who stands accused of cooperating with “terrorists” in eastern Ukraine as they allegedly brutalized Ukrainian personnel.

But when asked by the Baltkom radio on Tuesday if he had any clues on what Stenin had been through in Ukraine, the Ukrainian aide responded with a “yes,” saying he had probably been detained by “our security services.”

“This man was present during tortures and killings that terrorists perpetrated near the city of Shakhtarsk [in Donetsk Region]. The entire Ukraine and the world have been outraged by his photos that show a soldier who is wounded but still alive in one picture and is dead in the next one. We believe that he may be suspected of aiding terrorists. It is a felony under Article 258 of the Ukrainian Criminal Code. He [Stenin] is under investigation for his role in these activities. We don’t think it’s what you call journalism anymore,” Herashchenko said in the interview as recorded by Baltkom.

In response to whether Ukraine had any proof, the Interior Ministry official said he had no documents to confirm these allegations, but “I think it is true,” he added. The radio said it was ready to share the tape with those interested.

Dmitry Kiselev, the director-general of International Information Agency Rossiya Segodnya, on Tuesday spurned the aide’s groundless accusations against the agency’s photographer, saying they were “artificial and ludicrous."

“It seems as if they [Kiev] spent an entire week, fabricating a criminal case against the journalist," Kiselev said. He stressed Stenin’s mission was of purely humanitarian nature, and suggested that Kiev might soon seek to use the nabbed reporter as a bargaining chip.

This suggestion echoed a comment by the head of the human rights council under Russian President Vladimir Putin, who branded terror charges against Andrei Stenin as absurd, saying it was “an attempt to turn [Stenin] into a hostage to then swap him for people held in the Russian pre-trial detention facilities.”

Two possible candidates for the swap are Nadezhda Savchenko, a Ukrainian pilot detained in Russia and accused of being involved in a mortar shelling that killed two Russian journalists in June, and Oleg Sentsov, a man suspected of plotting terror attacks in the Crimean republic.

On August 9, Rossiya Segodnya submitted an application to the Ukrainian Interior Ministry with a request to take urgent measures to find its employee. The Ukrainian ministry responded three days later saying it was looking into Stenin’s case.

“The request has been received and added to the single register of prejudicial inquiries," an official at the Donetsk investigation department told RIA Novosti.

A number of press freedom watchdogs, including International Federation of Journalists, Reporters Without Borders and New York-based Committee to Protect Journalists, have condemned Stenin’s abduction and urged the government in Kiev to immediately release the journalist.

Press freedom conditions in Ukraine, especially in the volatile southeastern regions, have steadily deteriorated in recent months, with journalists being detained, attacked, abducted, and killed, according to a research conducted by the CPJ.

Stenin’s kidnapping is not the first incident of mass-media workers coming into harm’s way in Ukraine. Back in June, a cameraman for Russia’s Channel-1 TV station was fatally wounded in the stomach. Prior to that, a reporter and a sound engineer from Russia’s VGTRK media holding were killed in a mortar attack near Luhansk.