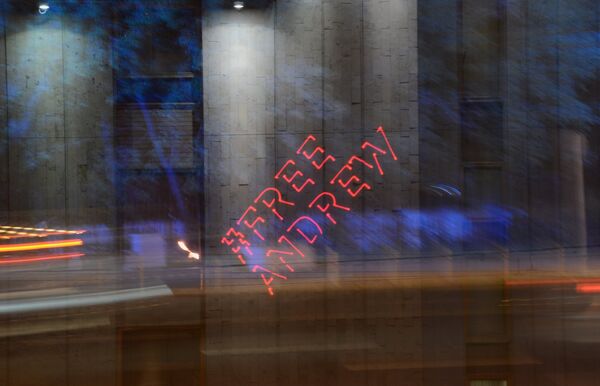 Andrei Stenin, a photojournalist of the International Information News Agency Rossiya Segodnya, went missing on August 5, when he was reporting on the conflict in eastern Ukraine, including from the cities of Donetsk and Slaviansk.

MOSCOW, August 13 (RIA Novosti) - Andrei Stenin, a photojournalist of the International Information News Agency Rossiya Segodnya, went missing on August 5, when he was reporting on the conflict in eastern Ukraine, including from the cities of Donetsk and Slaviansk. Ukraine’s Interior Minister Adviser Anton Herashchenko said Tuesday that the journalist was arrested by Ukrainian security services and is suspected of aiding the terrorists. Here is the timeline of Stenin’s detention in Ukraine

On August 7, 2014, Rossiya Segonya reported that it was unable to get in touch with Andrei Stenin. The last photos he submitted were received by the agency on August 5.

Sources close to Igor Strelkov, commander of the forces of the self-proclaimed Donetsk People’s Republic, said they believed that Stenin had set out for the city of Shakhtarsk in Donetsk Region, with a group of journalists from the defense forces’ information corps.

Andrei Stenin, an experienced war correspondent, had been working in Donetsk, Slavyansk and other towns in the east of Ukraine.

On August 8, a well-placed source in eastern Ukraine told the agency by phone that Stenin had been captured by Ukrainian forces, and was believed to be held at the National Security Service of Ukraine (SBU) office in Zaporozhye.

On the same day, a spokesperson for the regional SBU office in Zaporozhye told RIA Novosti that they did not apprehend the Rossiya Segodnya photographer.

Rossiya Segodnya requested information from the SBU office in the Dnepropetrovsk Region who promised to look into the matter. No comment was available from SBU central headquarters.

The Russian Embassy in Ukraine reported that it was investigating into Stenin’s disappearance.

“We demand the release of Andrei Stenin and also his proper treatment. The circumstances of Ukrainian security forces' previous detentions of journalists from Russia and other countries suggest that they [journalists] could be treated improperly," Kiselev said.

On August 9, Rossiya Segodnya requested that the Interior Ministry of Ukraine take immediate action to locate the agency’s photographer who had disappeared in eastern Ukraine where government forces were conducting an operation against forces of the self-proclaimed Lugansk and Donetsk People’s Republics. The request was processed by the Ukrainian Interior Ministry’s central office in the Donetsk Region.

On August 11, a representative of the Donetsk Interior Directorate told RIA Novosti that the request had been entered into the register of pre-trial investigations.

Ukrainian sources informed RIA Novosti by phone that a criminal case was being brought against Andrei Stenin based on eye-witness reports alleging that he was present at the torture and execution of Ukrainian servicemen.

On August 11, An OSCE Representative on Freedom of the Media Dunja Mijatovic released a statement calling for Stenin’s immediate release. “This dangerous practice of detaining and abducting media workers is unacceptable and must end," Mijatovic said.

On the same day, the International Federation of Journalists (IFJ) and the non-government organization Committee to Protect Journalists (CPJ) called for Stenin’s release as well.

Rossiya Segonya’s technical service reported that the cell phone of the missing journalist was detected in Slavyansk at 23 Kosior Street. Text messages are delivered to the phone, but calls either fail or result in the automated message “Account holder is outside the coverage area.”

On August 12, Vladimir Markin, a spokesperson for the Russian Investigative Committee, announced that a criminal investigation into the case had been opened under the Penal Code’s section on abductions.

On the same day, over 250 Rossiya Segodnya employees took part in a flash mob in the agency’s courtyard to support their colleague. A large chalk «#FreeAndrew» inscription was made on the asphalt and the agency’s employees surrounded the inscription and started chanting «Free Andrew," taking each other by the shoulders.

On August 12, Ukraine’s Interior Minister Adviser Anton Herashchenko said in an interview with the Latvian radio station Baltcom that Stenin had been arrested by Ukrainian special services for allegedly “aiding terrorists." Herashchenko later denied this in comments made to RIA Novosti. “I don’t know where he is. I am just guessing that he may have been detained by our security service," he said.

Dmitry Kiselev called the charges against Stenin “artificial and ludicrous."