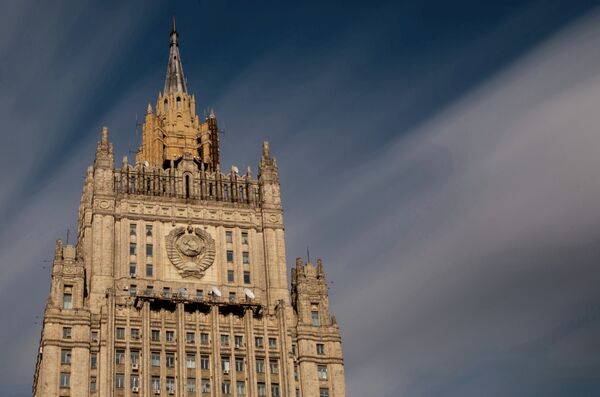 “We understand the call of an OSCE representative for freedom of mass media Dunja Mijatovic on the members of Ukraine’s Verkhovna Rada to give up on the provisions of the bill “On Sanctions,” that threaten freedom of expression and pluralism,” the ministry said.

Moscow stressed that it has many times drawn the attention of the international community to the systemic violations of freedom of speech and the security of journalists in Ukraine.

“We support the OSCE integrity in condemning Kiev’s attempts to legalize the policy of restricting media activity,” the statement said.

OSCE representative for freedom of mass media Dunja Mijatovic said the draft law on sanctions would allow authorities to restrict media activities, including on the Internet and in print, as well as television and radio channels broadcasts. Moreover, she urged that the legislation runs counter to OSCE commitments on free expression and free media.

Reporters Without Borders also condemned “the draconian restrictions on freedom of information envisaged in a draft law that the Ukrainian parliament approved on first reading.”

“We urge parliamentarians to reject this bill on second reading, as it is incompatible with the government’s obligations to protect freedoms. International conventions ratified by Ukraine stress that any restrictions on media activity must, under all circumstances, be necessary and proportionate,” Johann Bihr, the head of the Reporters Without Borders Eastern Europe and Central Asia desk, said in the statement.

Reporters Without Borders warned that if adopted, the bill “would allow the National Security and Defense Council (RNBO) to suppress the dissemination of any national or international media or block any website on the grounds of protecting ‘security and national interests’ without referring to a court.”

On August 14, Ukrainian lawmakers will meet to discuss in the second reading the legislation imposing sanctions on Russian companies and individuals. The legislation includes provisions to block media seen as a threat to Ukrainian security.