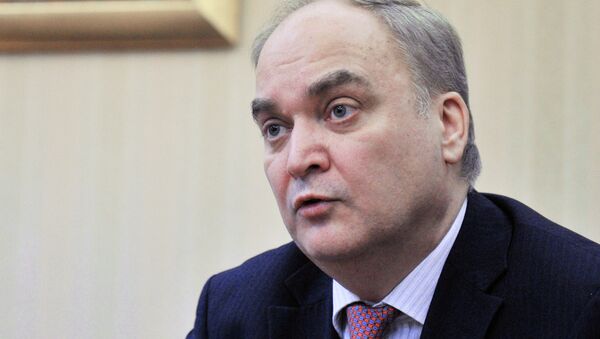 US accusations against Russia over alleged violations of the Soviet-era intermediate-range nuclear treaty are part of a massive anti-Russian propaganda campaign linked to the events in Ukraine, Deputy Defense Minister Anatoly Antonov said.

“A massive flow of US accusations is part of the anti-Russian campaign launched by Washington in connection with the events in Ukraine,”Antonov said in an interview with the Rossiiskaya Gazeta newspaper to be published on Thursday.

Anatoly Antonov stressed that the United States is using any means of information warfare to tarnish Russia’s image on the global arena.

He added that Moscow is ready to continue dialogue with Washington on INF treaty issues only on the basis of concrete facts rather than "data obtained from social networks" or "fuzzy satellite photos without links to topographic coordinates."

In late July, the US administration released a report claiming that Russia "is in violation of its obligations under the INF Treaty not to possess, produce, or flight-test a ground-launched cruise missile (GLCM) with a range capability of 500 km to 5,500 km, or to possess or produce launchers of such missiles."

The White House spokesman Josh Earnest said earlier that US President Barack Obama conveyed his findings to Russian President Vladimir Putin in a letter, in addition to the US previous attempts to raise the concern “with the Russians on a number of occasions through our standard diplomatic channels.”

Russian authorities expressed their own complaints about US compliance with the treaty in light of Washington’s plans to deploy Mark 41 vertical launching systems in Poland and Romania.

The INF was signed back in 1987 by the United States and the Soviet Union to prevent the use of nuclear and conventional missiles with an intermediate range, defined as 500 to 5,000 kilometers (310 to 3,100 miles).