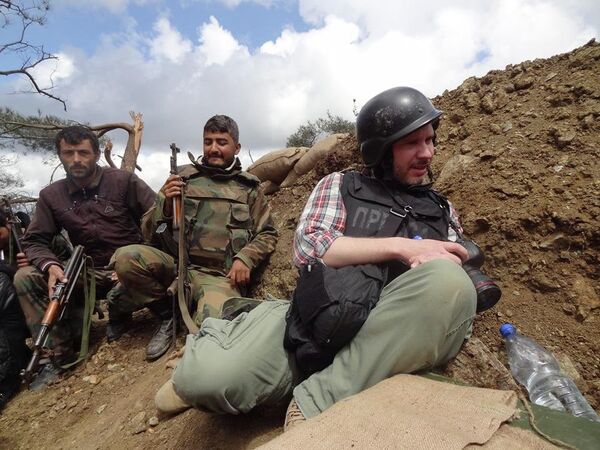 © RIA Novosti
Subscribe
The Committee to Protect Journalists has demanded that Ukrainian authorities clarify the status of Andrei Stenin, a Russian photojournalist with the International Information Agency Rossiya Segodnya, who appears to be in the Ukrainian custody after going missing on August 5.

NEW YORK, August 13 (RIA Novosti) - The Committee to Protect Journalists has demanded that Ukrainian authorities clarify the status of Andrei Stenin, a Russian photojournalist of the International Information Agency Rossiya Segodnya, who appears to be in the Ukrainian custody after going missing on August 5.

"We call on Ukrainian authorities to clarify the status of Andrei Stenin, who has been missing in the eastern part of the country for a week," CPJ Europe and Central Asia Program Coordinator Nina Ognianova said.

Andrei Stenin was reported missing last week after he went on a mission to cover the crisis in Ukraine’s turbulent eastern regions.

On August 9, Rossiya Segodnya submitted a request to Ukraine’s Interior Ministry to take urgent measures to find Stenin. The ministry responded to the request three days later under heavy pressure from an OSCE representative for freedom of the press, saying it was looking into the case.

On Tuesday, an adviser to Ukrainian Interior Minister Anton Herashchenko confirmed that the photographer had been arrested by the Ukrainian Security Service (SBU) on suspicion of “aiding terrorists.”

"If Ukrainian authorities are indeed holding the journalist, they should release him immediately and allow the media to cover events freely," the CPJ said in its statement.

Scores of Stenin’s colleagues gathered on Tuesday afternoon outside the news agency to raise awareness of the journalist’s disappearance.

Press freedom conditions in Ukraine, especially in the volatile southeastern regions, have steadily deteriorated in recent months, with journalists being detained, attacked, abducted, and killed, according to CPJ research.

Stenin’s abduction is not the first incident of mass-media workers coming into harm’s way in Ukraine. Back in June, a cameraman for Russia’s Channel-1 TV station was fatally wounded in the stomach. Prior to that, a reporter and a sound engineer from Russia’s VGTRK media holding were killed in a mortar attack near Luhansk.