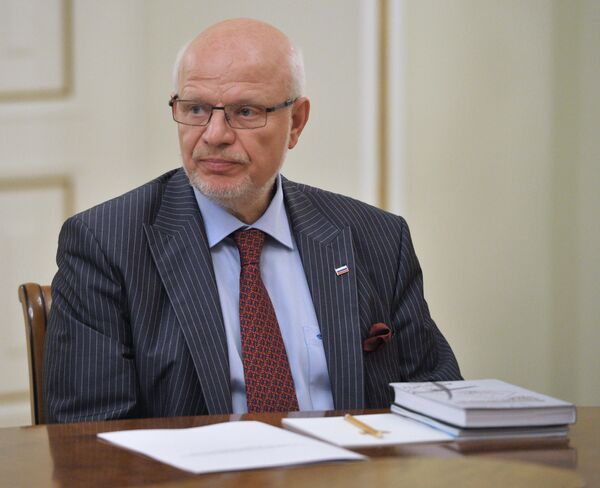 © RIA Novosti . Alexey Nikolskiy
Subscribe
The head of the human rights council under Russian President Vladimir Putin has called the Ukraine’s allegation that Andrei Stenin, the abducted Russian photojournalist, said to be held in the Ukrainian Security Service custody, was helping terrorists an absurd.

MOSCOW, August 13 (RIA Novosti) - The head of the human rights council under Russian President Vladimir Putin has called the Ukraine’s allegation that Andrei Stenin, the abducted Russian photojournalist, said to be held in the Ukrainian Security Service custody, was helping terrorists an absurd.

“At least I’m glad to hear that he [Stenin] is alive. But the accusations, implicating the photojournalist in having links to terrorists are simply absurd and ludicrous,” Mikhail Fedotov said, adding those, who claimed that Andrei Stenin had anything to do with terrorism, should first look up the definition in international conventions.

Fedotov stressed that Rossiya Segodnya photographer Andrei Stenin, who went missing in eastern Ukraine on August 5, was on a mission reporting on the conflict between the government troops and local self-defense forces, which did not immediately translate into aiding terrorists.

“In my opinion, it is an attempt to turn [Stenin] into a hostage to then swap him for the people, held in the Russian pre-trial detention facilities,” Russia’s senior human rights official said.

Fedotov also pointed to similar cases when undemocratic governments would nab war correspondents on half-baked terrorism charges, but said he hoped that the government in Kiev realized “journalists are not part of the armed conflict, they are but independent observers, the eyes and ears of their audiences.”

Fedotov’s statement echoed that of Dmitry Kiselev, the director-general of International Information Agency Rossiya Segodnya, who on Tuesday described accusations against Stenin as “artificial.”

“It seems as if they [the Kiev authorities] spent an entire week, fabricating a criminal case against the journalist," Kiselev said.

On Tuesday, an adviser to Ukrainian Interior Minister Anton Herashchenko said that Rossiya Segodnya photographer Andrei Stenin had been arrested by the Ukrainian Security Service (SBU).

Stenin disappeared last week while on assignment in eastern Ukraine, and there had been no information about his whereabouts until Tuesday. An unnamed source told RIA Novosti on August 8 that the photojournalist had been abducted by Ukrainian militia forces and was in custody in the city of Zaporozhye, an allegation the SBU later denied.