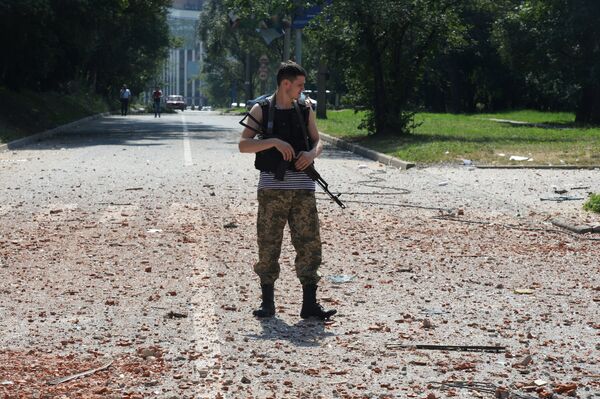 A group of Serbian volunteers, helping Donetsk militia to fight government troops in eastern Ukraine says they have repelled an offensive of pro-Kiev military forces who attempted overnight to break through to a vital motorway.

DONETSK, August 12 (RIA Novosti) – A group of Serbian volunteers, helping Donetsk militia to fight government troops in eastern Ukraine says they have repelled an offensive of pro-Kiev military forces who attempted overnight to break through to a vital motorway.

“Two tanks, belonging to the neo-Bandera [thugs], and one self-propelled gun together with their crews, as well a mountain gun, were destroyed during the fight,” the press office of the Donetsk self-defense forces cited the Serbs as saying.

According to the report, two Serbs were lightly wounded during the standoff, and soon re-joined their battalion.

Reports claiming that volunteers from the Jovan Sevic militia battalion were fighting in the breakaway Donetsk territory – the self-styled Donetsk People’s Republic, or DPR – started emerging as early as in May, when a group of Serbs first arrived in the then besieged city of Slaviansk near Donetsk.

Rumor has it that Igor Strelkov, who leads the DPR self-defense forces, knew the Serbian regiment back from the days when they all fought in the Bosnian War, an international armed conflict that took place between 1992 and 1995 and resulted in the internal partition of Bosnia and Herzegovina.

The number of volunteers fighting in the Jovan Sevic militia battalion is unknown, but the media claim they have been able to identify the commander as Bratislav Zivkovic.

The battalion has been named to honor Jovan Sevic, the leader of a Serbian hussar cavalry regiment, who in 1751 swore allegiance to the Russian Empire and established the autonomy of Slavo-Serbia, a province that constituted the territories of present-day Luhansk and Donetsk regions in Ukraine.

Several Spanish and Czech volunteers have also reportedly flocked under the banners of the eastern Ukrainian militia, who are striving to fend off the onslaught of heavily-armed government troops.