Sanctions Do Not Scare Russia - Medvedev 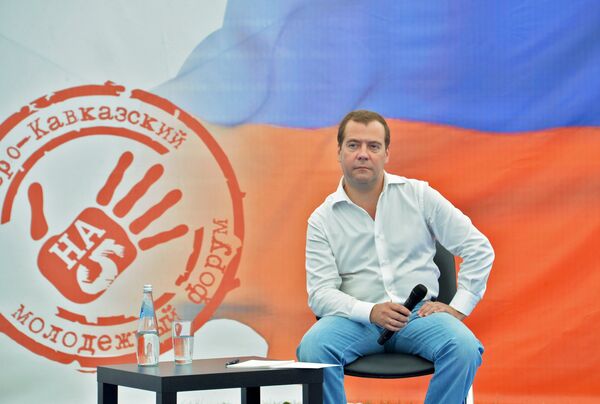 Russian Prime Minister Dmitry Medvedev on Tuesday said sanctions against Russia are not scary and any attempts of forced pressure on the country will not work.

PYATIGORSK, August 12 (RIA Novosti) – Russian Prime Minister Dmitry Medvedev on Tuesday said sanctions against Russia are not scary and any attempts of forced pressure on the country will not work.

"Sanctions are not scary for our country, and we understand that very well. Our country is strong. And no matter who tries to pressure us, we will nonetheless live in our beloved country, develop it, invest money [in it], and build our own state," Medvedev said during a Q&A session with members of a youth forum.

"Attempts of forced pressure on our country have never worked, and you understand that very well. And they won’t work now," Medvedev added.

On Thursday, Russia responded by introducing a one-year ban on agricultural and food product imports from the countries that have imposed sanctions on Moscow over the Ukrainian crisis, namely the European Union, the United States, Australia, Canada and Norway.

Earlier on Tuesday, the Ukrainian parliament adopted in its first reading a law that would allow Kiev to impose 29 different types of sanctions against Russia, including the transit of energy resources through its territory.

The new law would allow the blocking of stocks, the limit of sales operations, as well as partially or fully halting flights and the transit of goods through Ukrainian territory. It also gives the government the right to annul or freeze licenses on certain activities, including mining operations.