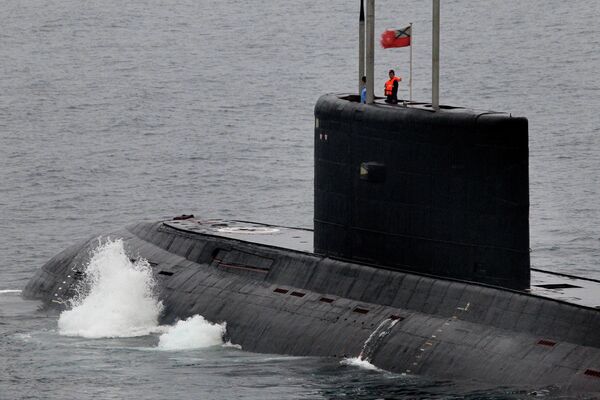 The first in the series of six Varshavyanka-class diesel-electric submarines, built for Crimea-based Black Sea Fleet, will be put in service with the Russian Navy on August 22, a Navy spokesman said on Tuesday.

MOSCOW, August 12 (RIA Novosti) – The first in the series of six Varshavyanka-class diesel-electric submarines, built for Crimea-based Black Sea Fleet, will be put in service with the Russian Navy on August 22, a Navy spokesman said on Tuesday.

“On August 22, St. Andrew's flag of the Russian Navy will be raised on diesel-electric submarine Novorossiisk at the Admiralty Shipyards in St. Petersburg,” Capt. 1st Rank Igor Dygalo said.

According to the spokesman, the submarine is currently undergoing the second testing phase in the Baltic Sea and will soon arrive at the Admiralty Shipyards.

Construction of the Novorossiisk submarine started in August 2010, followed by the Rostov-on-Don sub in November 2011, the Stary Oskol in August 2012, and the Krasnodar in February 2014.

The much-anticipated delivery of these submarines, dubbed by the US Navy as “black holes in the ocean” because they are nearly undetectable when submerged, is a key part of Russia’s naval strategy in the Mediterranean, where Moscow has recently deployed a permanent task force consisting of some 10 surface ships.

The Varshavyanka-class (Project 636.3) is an improved version of the Kilo-class submarines and features advanced stealth technology, extended combat range and the ability to strike land, surface and underwater targets.

These submarines are mainly intended for anti-shipping and anti-submarine missions in relatively shallow waters.

The vessels, crewed by 52 submariners, have an underwater speed of 20 knots, a cruising range of 400 miles (electric propulsion) with the ability to patrol for 45 days. They are armed with 18 torpedoes and eight surface-to-air missiles.

The Russian Black Sea Fleet has not received new submarines for decades and currently operates only one boat – the Kilo-class Alrosa, which joined the Navy in 1990.