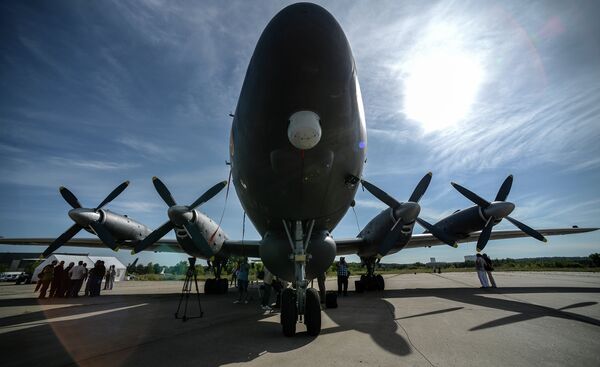 © RIA Novosti . Ramil Sitdikov
/
Go to the photo bank
Subscribe
The Russian Air Force has marked its 102th anniversary, dating back to the day when the Imperial Russian Air Service became a separate branch with the country's armed forces.

MOSCOW, August 13 (RIA Novosti) - The Russian Air Force has marked its 102th anniversary, dating back to the day when the Imperial Russian Air Service became a separate branch with the country's armed forces.

Russia marks the Air Force Day every August 12 in line with the Presidential Executive Order On Instituting Air Force Day of August 29, 1997.

This date was confirmed by the Presidential Executive Order On Instituting Professional Holidays and Commemorative Days in the Russian Armed Forces of May 31, 2006. The document listed Air Force Day as a commemorative day.

The date of the holiday was determined in an August 12 (Julian calendar July 30) 1912 order of the Russian War Department that established a special aeronautics unit under the Main Directorate of the General Staff. This day is therefore considered a starting point in the history of Russia’s military aviation.

The first aircraft, capable of flying combat missions were developed in the early 20th century. Starting in 1910, the Russian War Department began to purchase aircraft and to train military pilots. By August 1914, Russian military aviation had 39 aerial detachments with 263 aircraft.

World War I expedited the development of military aviation. The impressive combat potential of military aircraft was confirmed during hostilities. Early aircraft were first used for reconnaissance missions, and they later started destroying ground and air targets.

By the end of World War I, Russian military aviation, which initially flew auxiliary reconnaissance and communications missions, had evolved into an independent branch of the service comprising reconnaissance, fighter and bomber commands.

The Soviet Air Force was established as part of the Red Army. In early December 1920, it had 83 aerial detachments, including 18 naval detachments. After the end of the Russian Civil War, aviation enterprises were quickly restored and partially expanded, and the production of national aircraft models was launched. In 1924-1933, the Soviet Air Force adopted I-2, I-3, I-4 and I-5 fighters, R-5 reconnaissance planes, as well as the TB-1 and TB-3 heavy bombers.

The organizational structure of the Air Force continued to improve. In 1924 squadrons became the main tactical unit, and the first air brigades were established in 1927. Several heavy bomber corps were deployed in 1933, and three special purpose heavy bomber brigades appeared in 1936-1938. In 1939-1940, the air brigades were mostly replaced with air regiments and divisions.

At the start of the Great Patriotic War, the Soviet Air Force had 79 air divisions and five air brigades, as well as 19 air regiments, operating new types of aircraft. The Air Force continued to receive new military equipment, and its logistics support units were also being reorganized.

The Soviet Air Force suffered heavy losses during the first months of the war. The Soviet government did its best to strengthen the Air Force, reorganize the aviation industry and train pilots and aircraft maintenance personnel. By the midsummer of 1943, the Soviet Air Force had effectively achieved strategic air superiority.

During the war, the Soviet Air Force flew about 3,125,000 combat missions and inflicted substantial casualties on enemy forces. In all, 57,000 enemy aircraft were destroyed during dogfights and on the ground.

The Soviet Union broke up in late 1991. This and other events weakened the Russian Air Force and Air Defense Force considerably. About 35% of the air force units (over 3,400 aircraft, including 2,500 warplanes) remained in other post-Soviet republics.

Other post-Soviet republics also retained control over the best military airfields. The number of Russian military airfields was cut in half from the Soviet period, primarily in the western strategic sector. The flight-training and combat-training standards of Air Force pilots declined dramatically.

In 1992 Russia started developing its Air Force and Air Defense Force as an integral part of the country’s Armed Forces.

By January 1, 1999, Russia had established a new service called the Air Force, comprising two independent branches – the Air Force and the Air Defense Force. This was done under the Presidential Executive Order On Priority Measures to Reorganize the Russian Armed Forces and to Improve their Structure of July 16, 1997.

In 2009-2010, the Air Force was again reorganized, and the two-level (brigade-battalion) command system introduced.

Air divisions and regiments were dissolved, and seven major air bases with a ramified infrastructure established.

Fourth generation aircraft are being replaced by the latest models, including advanced aircraft and helicopters with a more impressive combat potential, specification and performance.

The modern Air Force is an important element of the Russian Armed Forces.

Russian combat aircraft is capable of hitting enemy forces and facilities using conventional, high-precision (smart) and nuclear weapons. Its units can provide air support to other services and branches of the Armed Forces during combat operations.