Russia, Poland Should Learn to Understand Each Other - New Polish Ambassador 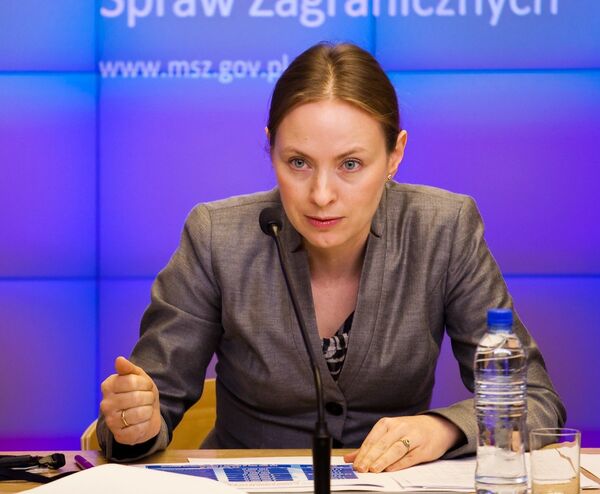 This fall Poland is sending a new ambassador to Russia. Katarzyna Pełczyńska-Nałęcz is the first woman envoy in the history of the relations between the two countries. Rossiya Segodnya correspondent met with the newly appointed top official to get her stance on the bilateral relation.

MOSCOW (August 12) RIA Novosti - This fall Poland is sending a new ambassador to Russia. Katarzyna Pełczyńska-Nałęcz is the first woman envoy in the history of the relations between the two countries. Rossiya Segodnya correspondent met with the newly appointed top official to get her stance on the bilateral relation.

Madam Ambassador, probably we could start with culture? While being the Under Secretary of State in the Ministry of Foreign affairs of Poland, you supervised the issues connected with the cross-cultural exchange year between Russia and Poland. But the Polish government decided to cancel the scheduled Year. Will there be any cultural exchange in 2014?

Katarzyna Pełczyńska-Nałęcz: Cultural exchange will continue. Even though Poland’s Year in Russia [dedicated to cultural exchange between the nations] was cancelled, I can say that the Polish side was very interested in holding the event. However the density of crucial events and the deteriorating relations between the European Union and Russia after the annexation of Crimea and because of the events in Ukraine, and, among others, deteriorating relations between Poland and Russia, made it impossible to hold it in the nearest future.

However, I would like to mention positively the words said by Russian Minister of Culture Vladimir Medinsky. The Polish side is very interested in salvaging earlier planned events not within the framework of the Year [in Russia], and to continue developing our cultural connections, because it is very important for ordinary Polish and Russian citizens. It is essential that people have an opportunity to learn and understand each other.

But Vladimir Medinsky has stressed that “Russia will give an asymmetric answer to Poland for the cancellation of the Year”.

Katarzyna Pełczyńska-Nałęcz: Asymmetric in a positive sense. We perceive it as a positive signal. Cultural cooperation is quite necessary, especially in such difficult and crucial political moments, when there are a lot of problematic issues to be solved. Necessary both for Russians and the Poles.

With great pleasure Poland and me personally, as a new Polish Ambassador to Russia, would like Russians to know as much as possible about Poland and the Polish culture. And through the culture to learn more about our country. There is a political will in Poland to implement all the significant cultural events that have been previously scheduled. It always brings only positive results.

Katarzyna Pełczyńska-Nałęcz: I, personally, am very pleased with it. And for our part, we really appreciate that Russian Film Festival “Sputnik” is underway in Poland. It is a very important and valuable event for the Poles. The Poles really watch Soviet and Russian films with great pleasure. And me too.

And what is your favorite film?

Katarzyna Pełczyńska-Nałęcz: Oh, it is a hard question. Because my favorite ones are the old (smiles). At the last year “Sputnik” Festival there was a wonderful film “The Geographer Drank his Globe Away”. But getting back to your question, there is an old Soviet film “Kin-dza-dza!” Have you seen it?

Sure! Everyone knows “Thrice Koo!” and “crimson pants”.

Katarzyna Pełczyńska-Nałęcz: There is really a long list of difficult and complicated matters in our bilateral relations. And to a large extent they derive from a complicated joint Russian-Polish history.

For me it was an important and interesting working experience, and it is really very good that such a Group was set. We had extraordinary interesting and complicated discussions. The outcome of this work is clearly seen in released joint publications. I am convinced that it would be very useful to continue the work of the Group. The solution of complicated issues takes time.

I think that the long discussions of the Group brought both sides if not to consensus on facts interpretation, then, at least, to understanding how the other side actually thinks. And this is also very important. Besides, there is quite a tangible measurement: the return of Katyn archives, access to documents, rehabilitation of victims.

One of the important outcomes of the work of the Group is the creation of the Centers for Polish-Russian Dialogue and Understanding, institutions which give a ground for cooperation between our societies.

We plan to go on with Youth Exchange programs.

What strategic challenges in our mutual relations do you see?

Katarzyna Pełczyńska-Nałęcz: Such challenges have existed for a long time. I would rather call them problematic areas where we pursue different interests, including those of objectively different.

First, and it is already a closed chapter, Poland’s membership in the EU and NATO. Back in the 1990th, it was a strategic choice for Poland.

And Russia had some concerns. But the choice had been made: Poland joined both the EU and NATO and afterwards there was a profound improvement in our bilateral relations.

Second, the energy issues: we pursue different interests here. Poland is interested in diversification of energy deliveries, while Russia is interested in its active presence at the Polish and EU markets. Russia treats the European energy legislation differntly.

And, finally, a different vision on the EU neighborhood policy. From Poland’s point of view, it would be ideal for the member states of the “Eastern partnership” to walk the way Poland had already passed. From Russia’s – such a scenario brings a certain threat to Russia.

A hard question: the debris of the Lech Kaczynski’s plane which crashed near Smolensk on April 10, 2010 still remain in Russia. What are the actual claims of the Polish side?

Katarzyna Pełczyńska-Nałęcz: I believe those expectations are clear and evident:the wreckage of the Polish plane carrying President Lech Kaczynski and a delegation of senior politicians and public figures on board that crashed on Russian territory should be handed over to the Polish government and the Polish people.

We are bewildered that four years after the accident the plane has still not been handed over. We reiterate our expectations. There is symbolic meaning for Poland and Polish citizens in getting the wreckage back.

We will be very clear with our expectations: Poland expects Russia to return the debris. And let me stress, we do not have any means other than diplomatic.

Visa regime between Russia and the EU is, without a question, within the competence of Brussels. But Russia very positively perceived new visa-free travel regulations between Russia’s Kaliningrad region and Polish near-border areas.

Katarzyna Pełczyńska-Nałęcz: Poland was very interested in local border traffic with Kalinigrad. This was a mutual initiative of the two sides, both Russia and Poland, which have done everything possible to make the lives of our citizens easier. And the results have surpassed all expectations – the border is no longer a barrier to travel.

We are interested in as many Russian citizens as possible visiting Poland as often as possible. It is important to us that Russians see what type of neighbor Poland is,” Pelczynska-Nalecz said, adding that Warsaw was calling for the speedy establishment of a visa-free regime between Russia and the European Union.

When was your last trip to Moscow?

And where have you been in Russia?

Katarzyna Pełczyńska-Nałęcz: I have been travelling around Russia. From what I recall, I have been to St. Petersburg, Kaliningrad, Murmansk, to many cities around Moscow, to Irkutsk, Krasnodar, Ulan-Ude, Nizhny Novgorod, Vladivostok, Samara, Yakutsk, Sochi and to the Caucasus. And all those trips basically were in the time of modern Russia.

What changes have you seen in Russia?

Katarzyna Pełczyńska-Nałęcz: That is a huge topic (smiles). As we say in Poland, it is a “river-topic”, because there are really quite a lot of changes. Moscow and St. Petersburg improved and it impresses. One can see a great difference between what you can see now and what was here 10 years ago. But one can also notice the disproportion in development of large cities and the province.

Do you speak Russian?

Katarzyna Pełczyńska-Nałęcz: Yes, I do.

Can we switch into Russian? (Up to this moment the interview was in Polish). Where have you learnt Russian?

Katarzyna Pełczyńska-Nałęcz: At home. My mother was born in Rostov-on-Don. Besides, I was learning Russian at school and then in the higher institution, then I was travelling around Russia and was always studying Russia.

Is your mother Polish?

Katarzyna Pełczyńska-Nałęcz: No, my mother is Russian. During the war my mother fled into Krasnodar from Rostov. Then she moved to Moscow to study, there she met my father and moved to Poland. My father is Polish. So am I.

When are you coming to Moscow to start your work in Russia?

Katarzyna Pełczyńska-Nałęcz: If everything goes as scheduled, then I take a plane this weekend and come to work on Monday. And by September 1 I need to assign my children to a school in Moscow.

Katarzyna Pełczyńska-Nałęcz was born in Warsaw on October 26, 1970. In 1994 she graduated from the Institute of Sociology of the Warsaw University. She worked in the Institute of Philosophy and Sociology of the Polish Academy of Sciences and was the Head of Russian department and Deputy Director of the Centre for Eastern Studies. In 2008-2012 was the member of the Russian-Polish Group on Difficult Matters. Since 2012 – Polish Deputy Foreign Minister. Katarzyna Pełczyńska-Nałęcz is an author of several dozen publications on the transformation of Russia and the Eastern European countries. She speaks Russian and English. New Ambassador to Moscow is married and has three children.