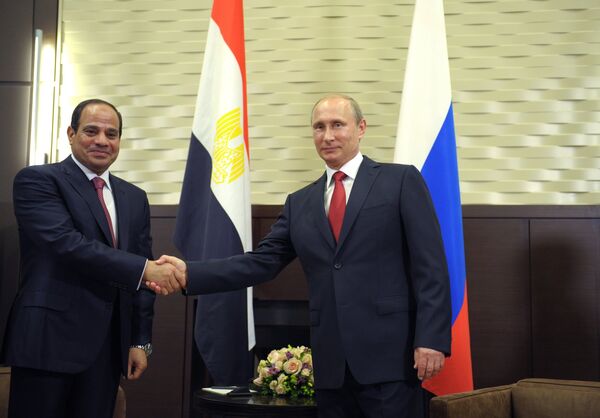 "We actively develop our military cooperation. We signed a protocol on the issue in March. We sell our weaponry to Egypt. We agreed to expand this cooperation," the Russian leader said.

The Egyptian president arrived in Russia Tuesday, on his first official visit since he was elected in May 2014. The two leaders planned to discuss the implementation of joint economic projects, including the possible creation of a free-trade zone between Egypt and countries of the Customs Union, and the settlement of the conflict in the Gaza Strip. In February, when he was still Egypt's defense minister, Sisi met with Putin in Moscow.

The United States, the European Union and their allies introduced several rounds of targeted sanctions against Russian companies and individuals after Crimea’s reunification with Russia in March, and followed up with sectoral sanctions targeting Russia’s defense, energy and banking sectors in July. In response, Russia started looking for alternative markets for its products, including in Asia and the Middle East.