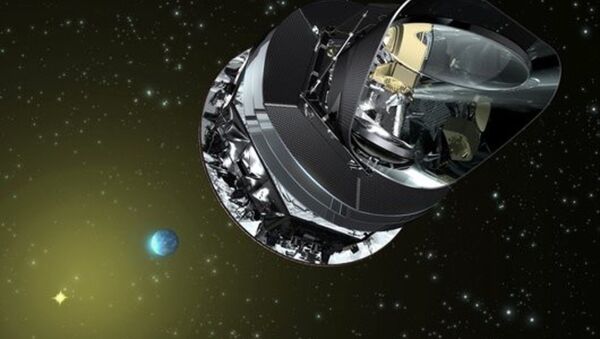 © East News/ Science Photo Library
Subscribe
If successful, the space observatory Planck Mission by the European Space Agency and NASA, may lead to one of the greatest landmarks in human history, revealing the earliest moments of the universe, astrophysicist and original planner of NASA’s Great Observatories program, Martin Harwit, told RIA Novosti.

WASHINGTON, August 13 (RIA Novosti) - If successful, the space observatory Planck Mission by the European Space Agency and NASA, may lead to one of the greatest landmarks in human history, revealing the earliest moments of the universe, astrophysicist and original planner of NASA’s Great Observatories program, Martin Harwit, told RIA Novosti.

“The mission findings may well become one of the great landmarks in human history,” Harwit confessed to RIA Novosti, following a NASA subcommittee meeting on Tuesday.

“It has a potential for becoming one of the great historic missions if indeed it may tell us what happened at a time early in the universe when the cosmos was only perhaps 10-35 seconds old,” he explained.

The Planck Mission, launched in 2009, will make precise measurements of the universe’s oldest light, created 13 billion years ago. Scientists, working in the project at the ESA and NASA, hope that the results of Planck’s experiments will not only reveal the origins of our universe, but indicate whether it will continue to expand – or collapse by itself.

“This piece of information, that has always been a dream, and never was thought of as being within human grasp. But here in the year 2014 on finds that perhaps this mission is going to be telling us how the universe started,” said Harwit, who is an expert in infrared astronomy and works as a member of the ESA’s Submillimeter Wave Astronomical Satellite, as well as on the Herschel Telescope.

A primary concern with the project is whether NASA will be able to continue financing the program at the needed levels.

“At the moment the people, who are working on the mission in the United States, are worried that they will not have enough funding to do all of the calibration that they need to make in order to be sure they can speak out with confidence about their results,” Harwit said.